Maybe it is because I’ve had a headache on and off (currently on) for days.  Maybe it’s because I need to invest in Pepto Bismo I down the stuff so regularly.  Maybe it’s because I was snuggling cutie Lousy at the time I read the Facebook post.  Whatever the reason I blew my top.  Per a Facebook post by a dog group Pasadena is discussing passing a BSL (breed specific legislation) ordinance against “pit bulls.”  Oh no you didn’ (with finger snap).  Of course, because I’m a hysterical person, I, like many others, jumped to the idea that this means they weren’t going to allow pit looking dogs in their city.  Not on my watch Pasadena.  Not on my watch!  Luckily before I came on my blog to rant about it I did some research.  Turns out the BSL is specifically about spaying and neutering pit like dogs.  So I’m not so worked up as much as I was a few minutes ago.

First of all let’s address spay and neutering.  Do it.  ESPECIALLY if you have a dog breed that is unfairly targeted because of his/her breed.  There are way too many dogs in shelters and way too many of those are “aggressive” breeds (a term I don’t believe in but using to get my point across).  (I actually had no idea that so many dog owners were against spaying and neutering … perhaps they are just against being told they have to do it?  I’m not sure.)  Wouldn’t it be great if a gaggle of pittie owners could show up to the Pasadena council meeting with their “fixed” papers and say, “I don’t know what you are all talking about.  Go talk to the owners of those yippy chihuahuas.”  Should this be a breed specific law?  No.  Calling out one breed for one reason or another is ridiculous.  Unlike some other dog owners I’m a-okay with neutering and spaying laws (I actually thought there already was one … maybe that is just the city of LA) but I’m NOT okay with you demanding that of only one or two specific breeds.

NOW let’s talk about the breed of “pit.”  First of all there is no such breed.  Many breeds fall under what we consider “pit bulls.”  How would you decide if a dog had pit in him/her or not?  For many dogs I watch I get the comment, “it looks like he has some pit in him.” 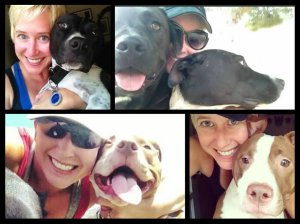 Probably.  So what?  Let’s say you have sweetie Kona in front of you and it is obvious she is a mix of the “pit” breeds.  Then you would have one of the sweetest dogs I’ve ever met in front of you as well.  I love her so much I wrote a blog about her and her fellow pitties.  The reason you distrust pits (if you do) is because of what you have heard/read about them.  If I asked every single one of you what breed dog you have had an “issue” with I can almost guarantee other breeds would be more represented than those that we label as pits.  Pits get their negative PR from asshats like Michael Vick and others who raise these type of dogs to fight and kill.  That is a bad owner not a bad dog.  Even the dogs that were saved from Vick’s horrificness are living lives where they have proven to be sweet and kind animals.

People who know pits will tell you they are extremely loyal and protective.  That they are cuddlers who want to be in your lap as much as possible.  That their big jaws that you may be afraid of give them the biggest smiles you have ever seen. 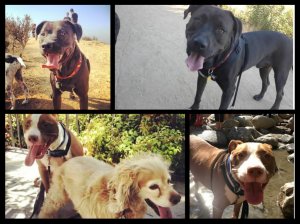 I’d like to convince you that pit babies shouldn’t be feared any more than any other breed.  I could do research and pull out stats on what breed has hurt humans the most and all of that nonsense but I don’t think it would matter if you truly are afraid.  I’m not suggesting that you go out and get yourself a pet you are fearful of.  I’m not saying that you have to love my sweet Kona or adorable Lousy.  I’m saying that you aren’t allowed to tell me I can’t have them as part of my family.  And although I personally am okay with breeding/neutering laws you don’t have the right to tell specific breeds that they have to be fixed just because you perceive them as scary.

Oh Pasadena.  I love you so much.  I wish I lived in you.  I go to you for everything from dining to doctors and yet your snobbishness is sometimes too much to bear.  Come on Pasadena.  Show me that you are classier than this and keep BSL out of your city.

(Pictures are of my adorable darlings that I have watched and loved that could be labeled as part pit bull.  Each and every single one of them a sweet doll.)

1 thought on “Leave my Babies Alone!”