Last week my good friend from NY, Jen, e-mailed me to tell me the Color Run 5K  (http://thecolorrun.com/) was going to be in LA and I needed to sign up.  Jen is not a 5Ker.  In fact I once almost killed her on the hill by forcing her to go up the Spine (aka the hard way) with Riggins and me.  She still won’t let me forget it.  If Jen said she had a blast at a 5K then it must be magical!  After looking through the website it became very obvious that this was going to be more fun if I could convince others to give up their Saturday afternoon with me.  After a mass email to anyone I knew that has ever done any kind of race I managed to corral my friend Dee Dee to come along.  Dee Dee is a blast so she was the PERFECT companion for this “race.”

I’d like to take a quick time-out to give you my theory on races.  I truly dislike really competitive races and would much rather be with a group of people whose goal is that everyone finishes and has a good time doing just that.  Let the really good elite athletes take off first.  They are amazing but we are not one of them (I’m presuming a lot about you right now aren’t I?).  I’m also not part of the next wave.  Those who aren’t elite but either were in their high school days (long gone by) or just have competition running through their veins.  I think this wave of athletes is the harshest.  These are the kill counters.  I find counting your “kills” disgusting and unsportsmanlike.  Counting your kills is when you are running (or whatever-ing) and you count up each person you pass.  Now if you have to do this in your head to motivate yourself, be my guest.  Making a contest out of it and proudly proclaiming your kill number … well … it makes you a douche.  There I said it.  I feel so much better when I run by someone who has started walking and encouraged them to keep going.  It’s an anti-kill.  That’s the next wave, the middle of the packers, the anti-killers.  One of my favorite races has always been the Danskin Triathlon (http://www.danskintriathlon.net/).  Given that it is an all female race the stress is already cut back on (sorry dudes but you are a giant ball of testrosterone competitive stress).  Add the fact that all participants are encouraged to help cheer on fellow competitors and you have a chorus of “you go girl” pushing you to the finish line!  Ladies if you have ever wanted to do a triathlon do this one.  It’s a wonderful and supportive atmosphere and I bet money that you can finish and finish happy (or at least not dead).

The Color Run calls itself the “Happiest 5K on the Planet.”  Woooooooohhhh … hold on there Color Run … that’s a mighty big proclamation you are trying to sell there.  You sure you can make good on that promise?  I mean I’ve done some 5Ks where people were pretty happy.  Dee Dee and I would just have to find out for ourselves.

I was giddy with anticipation the day before as I picked up our race packets and was anxious to get to the action.  When Dee Dee showed up to my house Saturday afternoon we both eagerly agreed that we were going ballz out on this thing.  Get mega colored or go

home was our motto.  There is something freeing about doing a non-timed 5K that consists of you running, walking, skipping and dancing around the Dodger’s stadium parking lot while volunteers happily throw colored powder at you.  Using our sunglasses as a shield we would gleefully run up to anyone with color demanding to be hit with it while twirling

around like lunatics.  Total blast!  Dee Dee was nice enough to alert me when my teeth were an unnatural un-white color.  Apparently I smiled a lot while getting doused.

At the end of the “race” (it’s a race in so much as there is a start and finish line) we headed down to the party pit where every ten minutes or so everyone in the audience threw color up in the air all at once.  After coughing our way through a cloud of happiness we headed off to our own end of the race party … at a local bar.  You’d be amazed how easily you forget you are covered head to toe in color until someone asks you about it.  Between a beer and delicious caramel and bacon covered popcorn (oh yah — you heard that right) I’d look over at Dee Dee and think, “I totally forgot we look like weirdos right now.”  Weird and happy!  Just the way I like it! 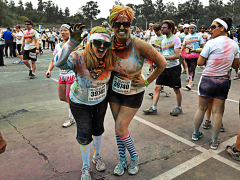 I dare say the color run is … The Happiest 5K on the Planet!

6 thoughts on “Color Me Happy”