Tomorrow, Feb. 14th, is V day.  To most that means Valentines day.  A holiday I’m not really in to but my niece, Kira, will happily point out that red is my favorite color so I can’t dislike it too much.  100 x’s better than that pastel wearing Easter that is right around the corner.  Watered down colors … blah!  It’s a day of XOXO, flowers and chocolate.  For another group V Day is being used as a global call to action to end violence against women and girls.  1 Billion Rising!  Per their website:

“On 14 February 2013, one billion people in 207 countries rose and danced to demand an end to violence against women and girls.

On 14 February 2014*, we are escalating our efforts, calling on women and men everywhere to RISE, RELEASE, DANCE, and demand JUSTICE!”

You can find a dance party near you by going to their site and looking up events in your area.  Above and beyond global dance flash mobs of Debbie Allen’s specially choreographed “Break the Chain” (If I can learn it you can … there are how to videos on YouTube) there are also marches and productions of The Vagina Monologues.  This year P!nk and her dancers taped themselves performing the dance Since I love her and I just happen to know the dance I was more than happy to blast it and dance around my room with her pretending I was her friend united in our love for women’s rights!  I suggest you do the same!  Below take a look at P!nk’s video along with my post from last year’s event.  This year in between smooches take pause and do a little jig to help raise awareness to end violence against women.

Posted on February 15, 2013by wendynewell 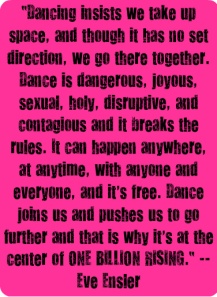 Yesterday, Feb. 14th, I took part in the event “1 Billion Rising,” (more info found in an earlier post – http://wp.me/p159Ee-9q) a global strike to refuse to accept continued violence against women. As I mentioned in my original post I don’t have much personal experience to bring to the table but I think it is an extremely important issue and one that deserves all of our support. 1 billion women (1 in 3) hurt by violence is simply unacceptable. I’ll give you a quick walk through of my day then leave you with a video from the founders of One Billion Rising.

Sadly Riggins didn’t join me in protest. First of all, he refused to learn the dance to Break the Chain (http://www.youtube.com/watch?v=WufjSyE_rK8), which was just lazy on his part. Secondly, he doesn’t like crazy and/or smelly people and I was headed to the heart of downtown Los Angeles. He was better off left at home. 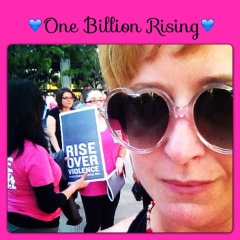 Parking at Pershing Square, where the gathering was being held, was pricey so I drove up a few blocks and parked at a cheaper lot (since it is near one of my favorite bars it is also a parking lot I’m familiar with). The jaunt to the event location would not even be a question in NY but here in LA that length of a walk is simply unheard of. I wasn’t in the best area but in the middle of the day the streets of downtown are a 1:1 ration of scary and businessmen/women. I figured being a victim of violence while heading to a rally against violence was simply too on point to actually happen

The gathering I went to was one of the smaller ones in Los Angeles as women (and a few brave men) ducked out of their offices on their lunch break to lend their support. As more 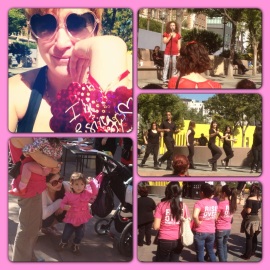 participants came together we all grabbed a cardboard heart to write why we were rising and tied it around our wrists. I REALLY wanted to write that I was doing it for the penguins (why? read – http://wp.me/p159Ee-aM) but this was serious stuff. Not the time or place for an inside joke just to make you and me giggle. I wrote, “I’m rising because love is better than hate …. always.” I ran out of room so the bottom half is unreadable. Still, it seemed more appropriate than the penguin comment.

The event organizers introduced themselves and started things off. First a very nice (I assume. I mean, I didn’t talk to her but I figure she is nice.) women in very tall heels (extra points for dancing in those) sang an original song 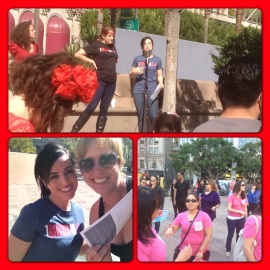 she had written. Deep … moving … emotional. Then a dance troop did the Break the Chainsdance for us before a quick tutorial. I was very happy I put in the time the night before and earlier in the morning to learn the dance as the tutorial was down and dirty and not much help if you weren’t already in the know. Then we all danced it together. It was FABULOUS! So much fun to just not give a flying freak what anyone thinks and dance with all your might in the middle of Los Angeles. After that they put on more music and just let the dancing continue.

Later that day I went to my Bar Method studio in Pasadena which had donated all their classes to One Billion Rising. With the complimentary class was a suggested donation to the cause. You know I love Bar Method and the fact that it was supporting such a positive message was an extra bonus.

All day it was inspiring to watch online as the videos come in from around the world of women and men rising. If you want to check them out some can be found on V-Day’s YouTube page or the event’s Facebook page (https://www.facebook.com/OneBillionRising). I hope that our global dance party helped bring attention to the horrible issue of violence against women and sparked more discussion and solutions.

*Trigger Warning* A film by @EveEnsler and Tony Stroebel.