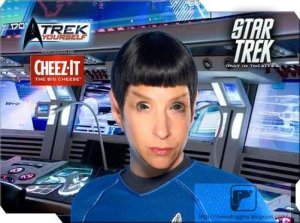 I love end of the year countdowns and lists. ADORE THEM! I’m not sure why. No matter the topic I have an opinion and will happily share it with anyone who will listen. I’ve even been known to watch end of the year list countdowns on ESPN and honestly I couldn’t tell you if I even have access to that channel any other time of year.

So! I decided to make my own end of year top 10 list of the best (aka my favorite) TV characters of 2009. Now I realize it doesn’t make sense to compile this list mid network season but I don’t care. I also freely admit I stole this idea from someone on Twitter who, with ties to the industry, was probably more qualified to make this list than I am. Still, with hours of programing currently recorded on my DVR I’m confident in my opinion on this matter.

#10. Dr. Jack Hodgins from Bones.
Honestly he almost got bumped by the son in Cougar Town but he made it so there you go. I really like the show Bones which is odd since I find the main female character horrifically annoying. I give full credit to Hodgins. Although I liked him better when Angela and him where “doing it.”

#8. Michael Western from Burn Notice.
Come on! The ultimate bad boy who does good. “Somebody needs you Michael.” Yah. Me.

#7. Hardison and Parker from Leverage.
I realize it is cheating having this spot shared by two characters but they kinda come as a pair and it’s my list so I’ll do what I want! I love all the characters on Leverage but these two are my favorite. He is crazy smart and she is super skilled — in the art of the con (is that how you spell that? Seems wrong.). Again bad guy/gal who does good. I say recipe for success!

#6. Kendall Cho from The Mentalist.
Okay I admit it. I had to look up this characters name. I usually just refer to him as the Hot Stoic Asian Dude. This is pretty high on the list for a character whose name I don’t know but EVERY time I watch The Mentalist I say out loud, “I love that Hot Stoic Asian Dude.” So there you go! I actually do love all the characters on this show especially Lisbon but Kendall still takes top honors. Watch the show. You honestly want to tell me they’d get anything done without him? He is calm, cool, and collected and knows more about law and life than the other 2 lower detectives combined. (I liked the “2 lower detectives” aka Grace & Rigsby, better when they weren’t “doing it”.) Without him they would fail. And who wants a fake government agency failing? Not I!

#5. Dr. Gregory House from House.
HOW CAN HOUSE NOT MAKE YOUR LIST? You heard me so called “TV person” who wrote that list I am blatantly stealing the idea of. HOW? I love that show and I’ll tell you this much it isn’t for any of the other annoying spineless characters. It’s all about House, all the time! A brilliant character who you should despise and yet love due to his wit and extreme intelligence (gross Moody from Californication could take some tips from him).

#4. Cappie from Greek.
That’s right a character from ABC Family made it on my list. Have you watched Greek? No. Then zip it and stop judging. Cappie is an adorable loser whose heart is bigger than the Grinch’s at the end of that story (after the growth spurt). My friend, the only other person I know who watches the show, agrees that the fictional Cappie should stop futzing around at college and just marry me! We can have jello shots at the reception.

#3. Barney Stinson from How I Met Your Mother.
Again didn’t make that other list making that other list invalid. How I Met Your Mother is often times seconds from being unwatchable. The lead male character is so annoying I’m shocked none of the other fictional characters just don’t off him and end his misery. BUT NEVER FEAR. BARNEY IS HERE. How can a character that is so disgusting and such a male chauvinist be so lovable? Comedy. That’s my answer. Even when he is saying nothing and almost out of the shot he is who I watch because his reaction is funnier than whoever is the focus of the scene … always!

#2. Sheldon from The Big Bang Theory.
One Sheldon line can explain my love for him, “That’s not a reason to cry. One cries because one is sad. For example I cry because others are stupid and that makes me sad.” Ha! How can you not love him? I have also recently learned that the actor who plays Sheldon, Jim Parsons, is older than me so I can actually love him without some dimwit calling me a cougar. (May be my top pet peeve of the moment. The next guy who calls me a cougar and then follows it up with, “Why are you angry? That’s a compliment.” I’m going to call a pot bellied pig. When they look hurt I’ll add, “What, it’s a compliment. I hear they are very loyal and make lovely pets.”)

#1. Drum roll please ….
Mary Shannon from In Plain Sight.
That’s right! A list over run by men is topped by a woman. As it should be! With an honorable mention to her partner Marshall, Mary is easily my favorite character on TV over the past year. Why you ask? Simple. She is me. Honestly. Watch the show. She is me. Go to Hulu right now and watch — http://www.hulu.com/search?query=in+plain+sight&st=0. You wont be disappointed!

Honorable mention to Captain Jean-Luc Picard of the Starship Enterprise. ST:TNG has to be in reruns on some channel somewhere and Picard should ALWAYS make any TV character list. When I get married I plan for Patrick Stewart to do the honors but instead of saying, “I now pronounce you man and wife.” he will say, “engage” (with the hand gesture). It’s going to be glorious! You just wait!

That’s all folks! Although I reserve the right to edit this list as I think of others …