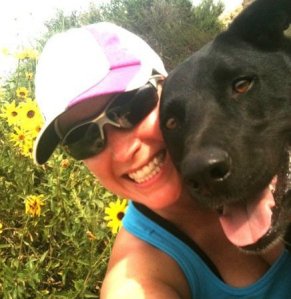 Riggins and I hike every weekend. If we are heading out with friends we will try one of the hikes in the Los Angeles mountains where I can be yelled at by fellow hikers for not keeping Riggins on leash (they are right … legally I should have him on leash … but come one who is he hurting?). If we don’t have a buddy we head to Runyon which is not only a legal off leash dog park it is also well traveled so the chance of being lost without help is slim to none. Although once I did lose my footing and slide down the side of the cliff (my butt is still deformed from the fall — really) and no one gave a flying rat’s ass. Well one nice gay mans stopped but given the fact that a zillion 1/2 people passed me it was like no one stopped. I ended that hike in tears with one of the guys from MadTV starring at me like I was a freak.

If you know Runyon Riggins and I usually go down the paved road and up the spine with a final little push up hill to the top lookout. If we are feeling good, have time, and it isn’t the temperature of the sun we will go up to the top of the spine, turn around and go down it and then up the stairs. The spine isn’t easy. I almost killed my friend from NY on that part of the hill and at one point actually thought I’d have to get a helicopter to rescue her. There are fewer people on the spine because it is difficult but what is the point of going out there and exercising if you aren’t working out.

Which gets me to my point in this post. Runyon isn’t just a work out location but a place to be seen. I’ve passed a guy once that had a giant sign over him that said, “actor. hire me.” I called him a tool under my breath (although like most things I whisper others heard me … luckily the tool didn’t). I don’t go to be seen. I’m “suited up” for hill battle. Notice the picture above. Tank top, sports bra, shorts, hiking shoes, hat, ugly ass action sunglasses. Riggins has his bell on (to give the little critters a head start before he attempts to catch and eat them) and his cooling jacket (all black dog = hot). On top of that, depending on the hill size and hiking duration, I’ll have my fanny pack or backpack loaded with enough water to hydrate a small village and snacks. Riggins, Martha & I once got stuck coming down from an extra long hike and ran out of water. It was horrible. I felt like a bad mommy and a horrible person and on top of that had a dehydration headache for the rest of the day. Never again.

At Runyon we are not the rule. Here are the things that highlight you as someone who doesn’t want to sweat as much as be seen:

* Wearing jeans. This baffles me. You can’t work out wearing jeans. Period. End of discussion.
* Wearing heels and/or flip flops. Really? Just stop it.
* Wearing a tube top. Very few women can pull this off and those who do it can’t. Tanning causes skin cancer. Slap on some SPF and hoist those things into a sports bra. (I saw a woman once who had her shirt, no bra, off and hung around her neck barely covering her goods … )
* Holding and/or drinking a Starbuck’s coffee cup. One day your heart will stop due to drinking large amounts of hot caffeine on a giant hill. I have to say I’m not going to help. Serves you right.

People I respect on the hill:
* Those using any kind of weights on any path. I can barely push my own body weight up that hill. Bravo to you in the weight jackets.
* People running up the spine. I’ve only seen this down by 3 people and 2 were my friends young and very athletic daughters. The other was the fittest man I’ve ever seen in my life … EVER.
* Those who ask me why Riggins has a bell vs. being snobby and suggesting he doesn’t like it. Back off with your judgement people. Bell=hill. He’s fine with it and I’m cool with him NOT snacking on rodents.
* People who say “hi” as you pass. I realize this is common trail courtesy in most places but Runyon is an extension of Hollywood where snobby sometimes rules. It takes real guts to say “hi”. I’ve been snubbed by many a star. I stopped watching Pushing Daisies because the lead refused to say hi when he passed me on the hill. Well that and his show was bad.
* People who sweat as much as me!

So come on people. Use the hill for what it is there for … exercise. Be seen down on flatland at the clubs.

1 thought on “Be Prepared. It’s a Good Motto For a Reason.”