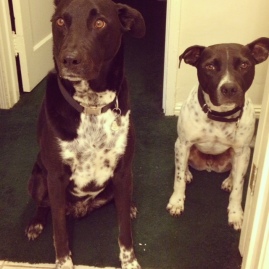 Butch Cassidy and the Sundance Kid

As you know I have set up the Death Race in my backyard.  It requires the neighborhood squirrels to successful bound from tree to tree to get a tasty treat with a dog (or two) barking up at them.  The Death Race has been set up for years and not once has a squirrel met his maker because of it.  Once or twice one has fallen during his jump, but all have managed to scurry quickly back up before nearing the sharp teeth of its predator.   I can’t say the same for other creatures of the backyard.  I’ve found a handful of dead baby opossums.  I assume the were playing opossum instead of running away which gave Riggins plenty of time to snatch them.  There have been 1/2 eaten snakes, and good ridden to them!  Every once in a while I’ve found a partially gnawed on bird.  I assume it was sick and couldn’t fly otherwise it never would have been caught.

I don’t consider any of this death my fault.  I love animals and all but there is such a thing as a circle of life and I have warned these critters more than once, that they shouldn’t hang out in the backyard with the big dog.  It’s not my fault they don’t understand English and logic.  My neighbor has tiny little dogs and birds.  That yard is a safe zone.  Hang out there.

Riggins is a hunter.  It was passed down to him by his German Shorthair Pointer Mommy.  It’s why, when he has a stuffed toy, he will aggressively shake it back and forth … “killing” it.  It’s why he “skins” his tennis balls, methodically ripping off the fuzzy part strip by strip.  A domesticated dog is still an animal!

Yesterday Lousy was going nuts so I let him out back.  He made a beeline for some bushes.  Riggins had been under those bushes the day before so I figured something was happening in there.  He disappeared and came back with a squirrel in his mouth (This is actually shocking.  Lousy isn’t a very talented hunter.  His bounding makes too much noise.  Every time Riggins and Lousy went out back and there was a creature to chase Lousy would quickly screw it up and Riggins would look at him as if to say, “you have got to be kidding me.”).  I yelled and he dropped the still living creature giving me time to grab him and pull him away.  As I was thinking the squirrel might be okay Riggins came darting out of the house, through the back gate and straight for his prey.  Within seconds he had picked up the poor thing, dug his teeth in and whipped it around until it was a lifeless fuzzy corpse.  Lousy didn’t mind Riggins coming in on his kill.  Apparently he was under the impression they would share in the feast.  Not on my watch.  Circle of life or no circle of life eating a dead squirrel is gross. 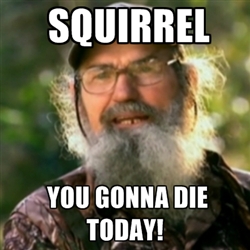 I got Riggins down with the squirrel still firmly in his grip.  We then started the game I like to call “I always win.”  That’s when I stand over Riggins with my hand on his throat demanding he “drop it” and he ignores me until he realizes I’m eventually going to win and let’s go long enough for me to pull him away.   I did take a time out in the game to go get my camera.  I realize this is morbid of me but he looked so regal and Duck Dynasty-ish.  A hunting dog that Uncle Si would be proud of!  Sadly I didn’t get the picture I had hoped for.

Eventually I got the squirrel and threw him away.  I felt sort of bad for the poor thing.  He was actually pretty cute.  As cute as disease carrying rodent can be.

I’m sorry to Mr. Squirrel and Mr. Squirrel’s family.  I realize yesterday was a tough day for you.  In the future remember dog is god spelled backward.  You mess with one of them there is a chance you will meet your maker!