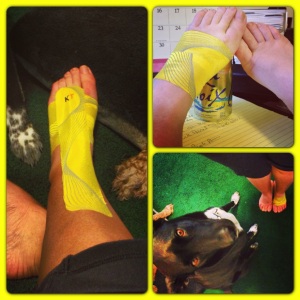 I’m not an athlete (not the first time I’ve said this to you).  Just because I do athletic things sometimes does not mean I’m an athlete.  In high school I was that kid that did well in archery … and that’s it.  My sister was on the long distance running team but at that time you couldn’t get me to run longer than a mile if my life depended on it.  I recently attended my friend’s daughter’s (college) softball game.  I was mesmerized by the speed of the balls being whipped around.  As my friend’s daughter fearlessly ran, jumped, reached, leapt, and fell to get to the ball screaming past her, I turned to my dad, who was with me, and said “no way!”  No way would I EVER put myself inline with that speeding projectile!  If that thing was coming toward me I’d duck screaming my lungs off.  Not an athlete.

Later as an adult, as I got submerged into real life, I turned to exercise to help relieve stress.  Fitness was a welcome and happy side effect.  I now try to work out 6 days a week.  Again I’d like to point out working out on a regular basis does not make me an athlete so it seems completely unfair that I should sustain injuries like they do.

2 or 3 years ago I managed to get a stress fracture on the top of my left foot.  It’s a fairly common injury for runners and, at the time, I was running a lot.  Alas I didn’t land wrong while running around the Rose Bowl.  Nope.  I landed wrong when I misjudged the steps in the jacuzzi at Burke Williams (a local spa chain).  The doctor had me off my feet for 6 weeks and in one of those ugly black stabilizing shoes.  It was a drag.  Once you have had a stress fracture you are kinda screwed.  It tends to be recurring which explains why my foot has been hurting lately.  Pisses me off.  The correct thing to do would be to keep off of it, stop exercising, and pull out that ugly shoe from the back of my closet.  It just sounds so annoying and boring I don’t want to do it.  Instead I’ve been slapping some KT Tape on it and relying on the magic I know it possesses (btw – KT Tape doesn’t stick as well if you use 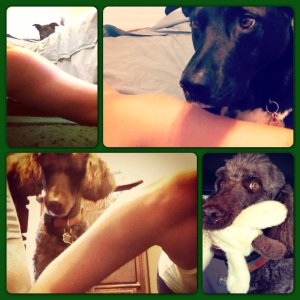 coconut oil as a moisturizer.  Even after washing a few times and pouring rubbing alcohol on your foot it still contains traces of coconut oil and causes the magic tape not to stick.).   Then I can continue to hike with the dogs and stay on tippy toe during Bar Method thigh exercises.  I can compromise and ditch the little running I’ve been doing.  Lately my shoulder has been bothering me too.   Completely unfair since I haven’t been swimming (sniff — I miss swimming).  So if someone could come over here and tape that up for me I’d appreciate it!  Just don’t make me wear that ugly shoe!

Have a Great Weekend!