I had a fun-filled weekend and wanted to tell you about it!

After a hike with Riggins on Saturday I met up with my folks and their friends at the San Antonio Winery.

I shared a yummy turkey sandwich with my mom, had a glass of wine, plus some tasting.  Sparkling wine = good.  Chocolate wine = horrible.  Don’t get me wrong.  I still drank the chocolate wine.  I wasn’t going to waste it!

Later that day I went out for an early dinner/drinks with a friend who recently had a baby.  It was a pre-birthday, post-baby birthing celebration and we managed to work our way through the Octoberfest menu!

Sunday I was up bright and early to walk a 5K with Riggins.  It took place

at the Rose Bowl, one of my favorite 5K routes, and raised money for the local animal rescues.  Since it was animal themed I decided to make it a non-competitve race for me and brought Riggins along.  He was in HEAVEN.  Since all the participants where animal lovers he made the decision that they were ALL there to give him attention.  He made his way from person to person forcing them to pet, hug and love him.  Every once in a while he would look back at me with an “isn’t this the most wonderful thing ever?” look on his face!  The walk itself was stress-free as I wasn’t worried about my time.  Water stations included doggie bowls and Riggins did a good job sampling out of each one AND my water cup.  Since he refused to go into a port-a-potty with me post-race I asked a nice man to hold onto Riggins leash warning him he would want to take off after me.  As I exited the “potty” Riggins was at full attention heading in my direction and the poor man had his leash wrapped 10 times around his 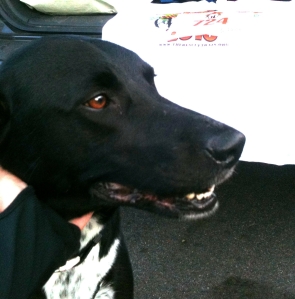 hand.  Apparently that was the amount of leverage he needed to keep Riggins from taking off toward the outhouse!  The post-run was even more fun for Riggins as he realized that EVERY table had treats on it.  If sitting in front of the people didn’t work he would just jump up, front paws on the table, and help himself.  He also found that while I was distracted he could take advantage of the other humans not paying attention, as every bag held treat samples that he felt he could help himself too.  More than once I had to use all my strength to pull his head out of a helpless humans gift bag.

Riggins and I both thought the race was a lot of fun and are happy we supported such a great cause! 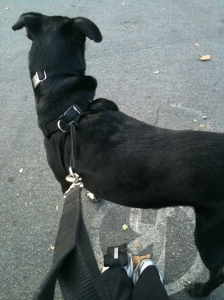