Happy Friday!  I decided on Fridays I should share some of my older posts you may not have read.  I know you haven’t because I see the stats.  Please enjoy, “All 254 of You Can F Off!” originally posted April 28, 2010.  Have a great weekend! 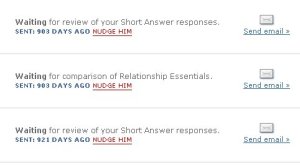 This is a screenshot from my Chemistry.com account that shows me my “connections.” I have 254 of them. That means I have gone out to more than 254 guys saying “I’m interested to learn more about you” or in Wendy online dating language, “I’ll totally meet you for a drink”. MORE THAN 254. MORE THAN. MORE THAN 254. There isn’t a font big and bold enough to write that.

I say more than since some guys, for one reason or another, have deleted themselves from my list. I’m sure for very logical reasons. Like, I’m not Asian (happened for a fact), have short hair, have a dog (which I will give you a pass on if you are allergic or just plan ol’ lame), don’t smoke, exercise a min. of 5 days a week, live in LA, drink socially, and am not “god fearing” (read past post for the pass on this one). That’s about all they have to base this “OMG I have to delete myself from this chick’s list” on. My profile doesn’t offer you much more.

Of the 254 guys a percentage I went out with so they get a “thanks for trying” participant ribbon. Neither of us have the energy to delete from the list.

BUT a good percentage of those guys never responded. NEVER RESPONDED. EVER. WHY ARE YOU ON THE SITE? WHY? EXPLAIN TO ME WHY. (Again this demands a much bigger angrier font style.) I’ll have to assume it is because I drink socially. It is such a turn off!

Now Chemistry has a new feature. It allows you to skip all their useless “get to know each other” steps and just email someone. I think I should go to all 254 one by one and write the following:

The XOXO may be a little bit of an overkill.

(Someday I’ll write about my dislike of the “nudge him” option. When someone nudges me I imagine them poking their elbow into my ribs and my reflex is to slap them. Probably not the reaction the poor guy is looking for.)