It’s Friday and that means I’m re-posting one of my older blog rants for you to enjoy!  Below’s post was originally published on Nov. 30, 2010.  I still heart NCIS and all the male characters! Enjoy and have a wonderful weekend!

Posted on November 30, 2010by wendynewell

You know I heart NCIS.  It is the greatest show on TV.  I have to say that despite my love for them I was horrified at how the characters came to the conclusion that a victim/suspect was lying and most likely the killer in a recent episode.  (To be honest it may not have been a recent episode as I spent most of the TV summer hiatus watching re-runs.)  My boyfriend (aka Special Agent Anthony DiNozzo – but again to be honest all the male characters are my boyfriend.  Even Ducky.  Seriously.  I love them all.) concluded that a woman was lying since she said she slept alone when her bed was messed up on both sides (meaning no alibi).  It turns out she was indeed lying and was a mistress to some married man and didn’t want to get him in trouble — drama!  When Ziva (or some other logical woman character) suggested she didn’t make her bed everyday (again being fully honest here I don’t remember who said what exactly) he came back with the logical, “but you always sleep on the same side.”

Here is the zinger … I do sleep on both sides!  Not only am I a restless sleeper who can take out any number of blankets, pillows and a comforter within just a few hours I do sleep on both sides of the bed at one night and since I’m lazy, often don’t start with the bed being that put together in the first place.  Here is how my night goes: 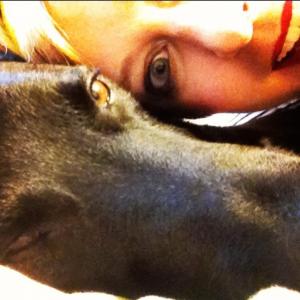 I stand over the bed and analyze my strategy.  Then I grab, what may or may not be the corner of a sheet and comforter from the foot of the bed, or one side of the bed, or the floor.  I then toss it up haphazardly to give the illusion of a squared off blanket start to the night.  Then I crawl in on the side of my bed that has the nightlight since I almost always read before going to sleep.  During the reading time I’m wiggling and kicking and willing the covers to make it over my entire body.  This seems easier than just making the bed correctly from the beginning.  Then I set my book down, turn off the light, wiggle closer to the middle, and go to sleep.  At some point, as you know, Riggins decides he wants to come up and join me.  Since he is no dummy he doesn’t go around to the cold unused side.  Instead he stands by the side I’m mostly on and cries until I roll over to the cold unused side, lift up the blankets, pat the bed, and tell him to “up up up.”  (I sometimes have to stand up for him to get the gist and then immediately plop back down on my new side.)  Now I’ve got a few hours to mess up the other side of the bed!  I use my time wisely wrapping and then kicking off blankets and flipping around and around in a pattern that sometimes mirrors Riggins circle, circle, flop routine.

So you see Mr. Special Agent Hottie I DO SLEEP ON BOTH SIDES OF MY BED.  After a night of “sleep” I stand up and it looks like there was a crazy party in my bed the night before.  When in fact it was just me … Riggins and me!