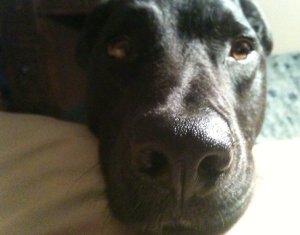 Last night as we were going to bed something was wrong. Riggins was having a hard time breathing and couldn’t get comfortable. He seemed to only want to stand in the middle of the room, with his tail between his legs snarling a bit while trying to suck in air. It was VERY upsetting.

I’m not a firm supporter of emergency vet trips unless necessary. I tend to think they don’t usually know much (well for that matter neither does the daytime vet) and it costs a lot of money and takes a lot of time. BUT my baby couldn’t breath. I carefully loaded him in the car and took off into the stormy night (it was raining — stormy). The emergency vet is super close to my house but due to panic and rain it took me a bit to find it the whole time saying out loud, “it’s okay we are almost there. You are okay just breath.”

When we got to the vet we had to be buzzed in. Apparently not the best area as not only were we buzzed in but the receptionist was behind glass. Since the place is emergency only they triage all patients. They came out to look at Riggins to see how bad off he was. A quick exam while standing in a brightly lit waiting room about the size of a walk in closet made her say he was okay. I tried to explain “this” wasn’t normal and that “this” wasn’t Riggins. When she turned back she agreed. Riggins breathing was getting worse and she said she was worried and would get the oxygen ready. I sat down with him while those in the waiting room asked me questions. I tried to be nice. I tried to answer sweetly since they were just trying to help. BUT I wasn’t okay and I just wanted them to zip it as I concentrated on not losing my shit. The nurse then came and took Riggins away. So there I sat. In a brightly lit glass closet sobbing quietly to myself. I put the hood of my sweater up since everyone knows that means I want to be invisible (a tactic that usually works on a plane, movie theatre, work, etc.). I did go through a laughing fit at one point when I heard the receptionist tell some f**ing moron on the phone what to do because his dog got into his pot stash. Really? Moron. My poor sweet, lovable Riggins couldn’t breath and some idiot was allowed to have a dog and couldn’t be smart enough to keep him away from his “stash”. Sigh. Moron.

A nice man with his adorable lab, Whiney, tried to make me feel better. He said he was sorry I was crying.

Another man told me it would be okay. This was after he found out Riggins was male. He was there with his pregnant dog … and pregnant wife … to him not pregnant was better!

My parents got out of bed and drove to the vet to be with me. Mostly because I was sobbing on the phone when I called them.

A nurse came out to get someone and when she saw me asked if I was okay. When I couldn’t talk and just waved to her she told me she didn’t think it was that bad and to just hold on. THAT DOESN’T HELP.

So I sat there and just kept hoping for the best. A yappy little mean dog came in (in the dog’s defense he had broken his leg and if I had his owners I’d yelp too) and I kept thinking, Riggins is too sweet. Please make him okay. He is so sweet just make him okay.

Finally we were called in to see the vet and Riggins. Riggins — who was fine. Seriously fine. Happy to see me and my folks. Panting but other than that breathing normal. Fine. They didn’t even give him oxygen. Just fine. His x-rays … fine. His temperature … fine. The vet didn’t know what to tell me (not surprising). So we all left.

Riggins slept through the night. Better than I did as I kept getting up and making sure he was breathing. He seemed okay when I left for work this morning. He got up and ate his food and, as usual, wanted more. He went and laid down. He seemed sad. Morose. Maybe trying a little hard to breath but not bad.

I’m now thinking that maybe he had an asthma attack? Maybe? How would I know?

My mom thinks he is just overly sensitive. A momma’s boy (she didn’t say that — I’m translating for you) whose normal routine had been turned upside down the past few weeks.

My dad thinks it is because he hasn’t been out on his hikes the past couple of weeks. I haven’t taken him since he has been sick … it seemed like a dumb thing to do.

I’m at work. I hope he is okay. I wish my office was closer so I could check on him at lunch. I wish I didn’t have to work. I wish he wasn’t sick. Poor Riggins.