So here is what happened last night at my Bar Method class.  I walked in, grabbed my weights, and made my way over to the corner of the room.  People tend to stay in the same general spot class after class so I nodded “hi” to those around me.  One of the young women turned around and the following conversation took place:

Young Woman: I just have to tell you that you are looking really strong lately.  (Editors note – “strong” is translated in any woman’s head as “not thin but you know, not a big fat slob.”)

Wendy:  Wow.  You are now my new best friend.

Young Woman:  Yeah I was watching you last night (Editors note – this isn’t weird.  I know it sounds weird but it isn’t.  The class, although great, is repetitive and after a while you tend to watch other folks.  After all you can only stare at yourself sweating and breathing hard in a dance mirror for so long.) and you look so much “stronger” since you started class, what was it?  About 3 months ago.

Wendy:  Thanks!  Actually it has been a few more months than that. 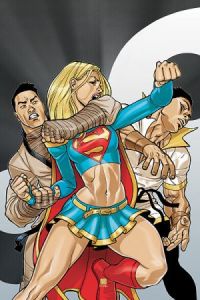 ming for over a year my body just doesn’t care.”  It’s true that I’ve noticed myself being more toned and strong lately but let us break this down. During the past 13 months at Bar Method I’ve gone to class 3 nights a week, I’ve trained (and completed) two triathlons which required ongoing swimming, biking & running, I hike with Riggins every weekend, and all in all spend every second of free time sweating.  So it really is bullshit that I don’t look exactly like Supergirl  Not the actor, the ridiculously good-looking cartoon version.  I mean come on.  Look at her abs!

In fact what seems to be a draw for most people to the Bar Method is the quick results.  Just ask Ricki Lake or that Osborne girl.  They say “AMAZING” results in just months, weeks, SECONDS!  Go to Yelp and read about people dropping pant sizes after few short classes.  Ummm … how do I say this nicely?  LIARS.  LIAR LIAR PANTS ON FIRE.

It’s true that my body changes slowly but even so, stop with the lies.  You are making me look bad.  Poor little me that works for over a year for one semi-compliment from a classmate.  That’s okay.  I’m still taking it as a compliment!

2 thoughts on “I’m Still Taking That as a Compliment”