Since I bombarded you with details of a zillion niceties yesterday I’ll limit today’s post to just one!  Don’t worry though … things are happening in the background.  The wheels are still turning on some fun-filled surprises. 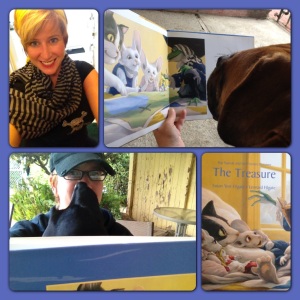 #23 – Reading is Fun.  Last week my good friend Cathy asked if I wanted to read to one of the classes at her son’s school.  Of course!  I’m an avid reader.  My personal taste runs from the silly (I’ve read every single book in Janet Evanovich’s One For the Money series.) to the deep and serious (I’d love to think of an example here but just can’t.  You will have to take my word for it.).  I’m happy to read books that I’ve passed on to male friends that they have enjoyed (The Girl with a Dragon Tattoo series and Ready Player One for example.) as well as those I’d only pass on to women for fear any male friend would mock me.  Like anyone who can call themselves a true reader I can’t manage to get through Fifty Shades of Grey and weep a little for the American public when I see it on a best sellers list (It’s been on some kind of best seller list for ions now.).  I was happy to share my love for reading with adorable young minds.

Since I doubted the kids would enjoy a dramatic reading of Gone Girl from my Kindle, I asked my Mom if she had an adequate book for first graders.  Luckily for me, and my niece and nephew, my mom was an elementary school administrative assistant for years and is in the know.  She let me borrow her copy of The Treasure (http://tinyurl.com/b2w9amh).  A very pretty book written by Susan Yost-Filgate and illustrated by Leonard Filgate.  The story follows a mouse, his sister, their friend the cat and frog on an adventure to find a pirate treasure.  On the way they come across a duck and her family, two ants, and a dragonfly.  If you are counting, and I was, that is 8 different character voices.  I suggested to my friend Cathy, who just happens to be a voice over artist, that we should switch books since mine required an enormous amount of voice changing talent.  Alas her book, pirate themed as well, included two Irish pirates.  As much as it is a struggle for me to voice a dragonfly I’m even worse at an Irish accent!

Yesterday morning, after practicing reading to Bud and Riggins, I got ready to go.  I put on what I considered a pirate themed outfit (T-shirt with skull and crossbones, stripped scarf and bright yellow scarf in my hair.), then  I grabbed my book and headed off.  Once at the school, and after some drama surrounding who was going to read where, I made my way to my assigned first grade class.  To say the teacher was waiting for me was an understatement.  I think she was looking forward to the short break from her overly hectic day.  My class was full of adorable tiny little people with lots of ideas that needed to be shared.  It took us awhile to get through the book since there was a lot of guessing on what was coming next and what kind of things pirates tend to wear and what they like to do.  There was a lightbulb that went off after they saw the pirate flag and there was a lot of discussion on how it looked like my shirt and how I was wearing scarves just like the characters were.  1/2 the audience tended to call out at will, while the other 1/2 patiently raised their hand.  I would stop to pick out those who were raising their hands in the hopes of encouraging that behavior.  It really didn’t work.  I’m afraid I’d fail as a first grade teacher.  One little girl in the back raised her hand and when I choose her just she said, “I like you.”

Finally I made it to the end of the book.  We talked about the lesson we learned and what we liked to read.  I told them my birthday was coming up and asked them how old I was.  The general consensus was 25 which means they are the smartest children you will ever meet.  When I asked if anyone was going to guess 39 one lovely child announced he was going to guess 100.  I talked to them about my 39 acts of kindness and we brainstormed on what kind of nice things they could do.  We all promised to do at least one nice thing in the next week.

After saying good-by to my class, and peeling off the little girl who said I was nice, that now clung to my legs asking when I’d be back, I went over to the class my friend was reading in.    Her son’s class.  I made it just in time as Cathy said they had asked her to read another book and wondered if I’d like to read mine.  I have to say there was a lot of pressure. I mean who wants to follow the dramatic reading of the voice over artist?  Not I!  I was afraid of letting the kids down because after all if I where them I’d want to be entertained by the many voices of Cathy too!  With 8 voices in my book I had maybe 5 that sounded different and they went in and out as often as any accent Mel Gibson has had on-screen.  Still I sucked it up and read through my book again.  This time to a crowd that some would consider much more polite!

All in all I hope the children had fun and I’m happy that I had the opportunity to be a part of the schools day of reading.

(I’ve been asked for pictures of Bud so here you go …  We went up Runyon this morning and both Bud and Riggins have been asleep ever since.  They did take a break from napping to clean up the huge mess I made when I dropped a pizza on the floor while transferring it from the oven to the cutting board.  Yes, I still ate it.  Bud is with us for one more night before his mom comes to pick him up.)