Don’t hug a dog.  That is one of the top rules of dog and human etiquette if you don’t want to loose part of your nose in a dog’s teeth.  Understandably the dog sees the move as aggressive (or if he/she is well socialized a move to wrestle).  Kisses are another no-no.  What moron would put their face up to a dog’s nose (shamelessly raising my hand).

I hug and kiss dogs.  Every single dog I’ve ever dog sit or know well I’ve hugged.  I get right up in their face and give them kisses and a snuggle.  I don’t suggest you do that.  Per the rule it just isn’t smart.  And yet … Riggins gets cuddles almost every morning.  He will come to my bed and wimper until I say, “come up and get kisses.”  He jumps up and positions himself so I can drape my arm over him.  I’ve curled up with Morgan in the Gogreve’s guest bedroom.  Even the killer, Lousy, wanted to snuggle whenever possible.

90% of what I do would give Cesar Millan a heart attack.  Cesar’s dog etiquette follows the main rule that a dog is a dog.  Not your baby.  A dog.  Ha ha ha ha ha ha!  As if.  Riggins puppy trainer told me how he gave his dog his own steak every now and then.  He also fully admitted his dog had separation anxiety as the dog went EVERYWHERE with him.  His reasoning is that his dog’s life is short so f*ck it.  He was going to do anything he could to make his dog’s life the best possible.  Hazzah!

In general the bigger the dog the shorter the dog’s average lifespan is.  This is proof positive there is no God.  Big dogs are almost always the biggest hearted lovers you could ever meet.

Case in point … Clover.  Clover is a golden retriever mix (mixed with something big) who is staying with Riggins and me for a while.  I call her the Gentle Giant.  She is about 35 pounds bigger than Riggins with fur that feels like crushed velvet (and is all over my house … I just vacuumed yesterday and my hall/bedroom looks like it has a white fur rug over it) and a giant fluffy squirrel tail.  Clover spends our time at home laying in the middle of my house where the bedroom door and kitchen door meet the hallway.  No matter where I want to go it requires me to step over Clover (usually bending down to give her a smooch).  The best thing ever is hugging her.  I lie down and use her as a full body pillow.  This poor dog doesn’t get a normal Wendy hug she has to endure a full body hug!

I’ve walked the neighborhood with Clover and Riggins only once so far and every single person was scared crapless of the terrifying creatures at the end of the leashes I was carrying.  Riggins and Clover where much more interested in getting to the many squirrels we saw scurrying up the trees, than tearing any humans to bits.  You have a much better 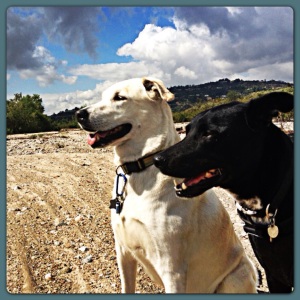 chance of getting nipped by a chihuahua then Clover!

Give me a big dog any day.  Not that I don’t like small dogs too.  I do.  It’s no secret that if I had a little dog he would come EVERYWHERE with me in a fancy little purse.  Poor thing.  Imagine how tortured he would be.  When it comes to hugs, comfort and overall goofy happiness I pick big dogs.  Big dog hugs are the best!  Cesar is missing out.

1 thought on “The Gentle Giant”