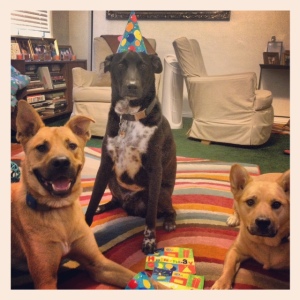 Saturday was a big day for us.  Before going to my friend’s wedding I had to celebrate Riggins birthday!  On the 22nd of this month Riggins turned 8.  Such a sweet and loving boy!

Jax, Bear, Riggins, and I got up and headed off for the Laurel Canyon dog park.  It’s a giant park that gives the dogs lots of room to run around.  The three of them investigated their surroundings then Riggins found a nice cool spot in the shade while Jax and Bear headed off to chase critters and other dogs.  The two sibblings would take constant breaks from their activities to go check on Riggins and join in the relaxing shade.

All were pooped when we got home so I thought it was the PERFECT time for birthday pictures.  Bear refused to wear a birthday hat.  Apparently she isn’t forced to be the subject of ridiculous pictures constantly like Riggins is.  Jax was a little more accommodating, but not much.  Riggins knew what was up and bravely sat still while I placed a coned hat on his head and started snapping away.  He wasn’t happy about it, as you can see, but he was willing to go along.  By the time I tried to take pictures of him and me Riggins was done and refused to do more than lie on the floor.  As a reward everyone got some extra treats!

This is the first time Riggins has celebrated

his birthday with other dogs vs. just humans.  I’m not sure if he liked having to share in the attention and treats although it made for great pictures!  My folks gave him presents which he opened on Sunday.  Once opened, I had to quickly hide them as Jax felt he should get treats too and warning growls filled my living room!  Jax and Bear went home yesterday so this morning I brought out Riggins treats for him to play with.

Happy Birthday sweetie Riggins.  You are the bestest!