I just received this email message: 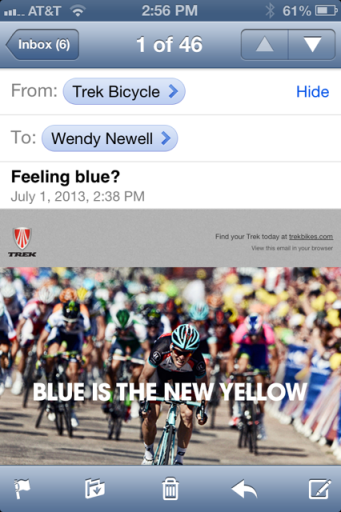 Why yes Trek bike e-mail marketing folks I do feel blue.  How did you know?  I took this as a sign that I should cancel my evening Bar Method class and instead get out my non-Trek (I’m not fancy enough for that brand) bike and take a cruise.  Then I thought about having to put on those tight bike pants with the giant pad in the crotch and figured I’d stick with Bar Method for my stress release today.

I think the more important thing is why am I blue:

I believe it is these voice mails sitting on my phone, staring at me, mocking me, and that I have been avoiding, that have me silently sobbing while driving down the 101.  As you know I left my job because I was unhappy and very stressed.  Stressed to the point that it was hurting my quality of life.  So I left …. now I have no job.  No prospects … except for jobs exactly (or really similar) to the one I left.  The thought of having to take one so that I can pay my bills sends me into a downward spiral requiring Xanax and mixed cocktails.  Let’s face it could I do it?  Yes.  Am I good at it?  Yes.  Would I be miserable?  Probably.  Sigh …. why oh why can’t someone give me a shot at doing something else?  Something I’d like to do and wouldn’t dread?  Is this really what we have come to?  Having to choose between a roof over our heads and happiness.  No possibility of both?  THAT’S DEPRESSING.  No wonder I’m blue.  Why can’t someone call me and say “I saw your resume on (insert one of many job related sites) and would love for you to be the executive director of Los Angeles’ new no kill shelter.”?????  Is that really too much to ask?????

In order to put a stop to my giant pity party of one (plus two dogs in the backseat) I swung into McDonald’s for a tasty $1 large diet coke, came home, put on my big girl panties and called back the job dude.  He was very nice and understanding.  I am just beyond sacred that it will get to a point where I will have to buckle and take a job like my old one and by the time it comes to that I would have already told everyone I’m done with sales and they won’t want me.  Aaaaaaahhhhh.

To stop the stress and unhappiness let me share pictures of Chloe and Mashugana with you.  They can make anyone happy! 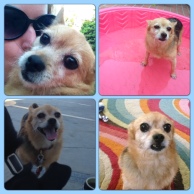 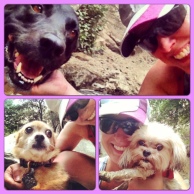