You guys … I’m a clutz.  It’s pretty shocking that I (knock on wood) haven’t caused myself serious injury.  Although I did give myself a concussion that one time.  That was pretty bad.  Other than that none of my bumps and falls have caused me to have to go to the emergency room.  I think I just go “rag doll” when I start to lose my balance and just drop.  That must save me from getting really hurt.  I’m in no way a hero.   I don’t teeter around and eventually stand back up right with a heavy sigh.  Nope.  I falter and DROP.  Sometimes for no reason at all.

Yesterday while hiking with the dogs I had them both off leash as we crisscrossed over a stream (pretty dried up stream due to the hell like weather we have been having).  It takes everything I’ve got to stay upright jumping from rock to rock.  Hanging on to dog leashes makes it nearly impossible.  Plus it is safer for both the dogs and me to just take care of ourselves.  Because they are off leash I try to be very conscious of the other hikers as some, gasp, are afraid of dogs.  Heading back from our hike to the waterfall I saw a guy coming toward us.  At first he seemed cool and Asscher (golden retriever) bounced right by him.  Then the dude saw Riggins and FROZE.  People are often afraid of Riggins.  It’s understandable.  He is scary black with big teeth.  His face has actually gotten more angular with age so his head almost has a Doberman look to him when his ears are sticking up.  Add the fact that part of one of his ears has been bitten off and you have got a mean looking dog on your hands.  Now you and I know Riggins is a lover not a fighter but if you don’t know that I can see how you would be hesitant.  To make matters worse Riggins is VERY sensitive to others around him so if you are afraid, he is afraid, and that makes him growl, and that makes him scarier!  I grabbed Riggins and was pushing him to my side so I could hold him away from the guy as he passed us.  I was about to say I had him and the guy was fine to pass when I went down mid-sentence.  I had been standing on a rock and just lost my footing.  I fell full butt on the rock I was standing on and then slid down to the ground.  It wasn’t a big rock but big enough for a little slide to make my fall even more dramatic.  The poor hiker had to get over his Riggins fear to run over and help me up.  I thought that was pretty nice of him.  I’ve fallen in my neighborhood with Riggins at my side and everyone just stared at me.

If you are counting, and why wouldn’t you be, that is the second time in less than a week that I’ve fallen down and someone had to come to my rescue.  Sigh. 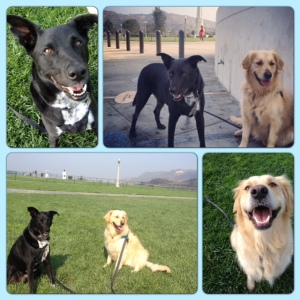 I have a real nice bruise on my butt.  I wanted to show you a picture but honestly it doesn’t look bad enough.  Considering the pain I’m in my entire right cheek should be black and blue.  I did text the pic to a few people to get sympathy, so if you got the butt pic consider yourself a good friend!  I had to tell my Bar Method teacher I bruised my bum before class today so she would understand if I did some modifications to the moves.  Embarrassing!

My left butt cheek is permanently misshapen due to a fall during a hike years ago.  It is oddly pointy.  People say that isn’t true but to those people I suggest they aren’t looking closely enough at my butt.  I was kinda hoping this fall would smush it back into place.  No such luck.  Maybe next time.  And we all know there will be a next time!

(Since I’m not sharing a butt picture I’m posting cutie pictures of Riggins and Asscher over our last two days of adventures.)