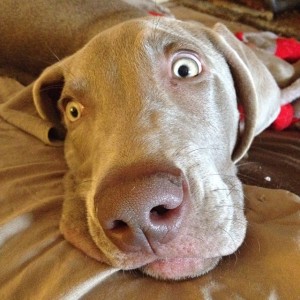 Before we all headed up to my sister’s house for Thanksgiving we were warned that the new puppy, Captain Shadow, was a chewer.  There are a ton of chew toys out there and many that are specifically for teething puppies.  Most of them look a lot like the products you would purchase for teething human babies.  I swear if you can make a product that can be marketed to both new baby parents and new dog parents you have made it.  Those are the two best consumer groups ready and willing to drop cash on anything.  When Riggins was little the best “chew” toy he had was a Hartz ball chew thing that I got at the supermarket.  Not at all fancy.  It was made of some sort of hard plastic was white and bumpy with super bumpy purple areas poking out of it.  I don’t think they make them anymore, but it was the best.  He would chew on that thing for hours.  The key was to find what Shadow liked.

I had purchased a little toy on clearance at Petco for Shadow but when I heard how much he was chewing I tossed that one to Riggins and decided to make him some toys.  Dogs like to chew and be destructive so my goal was to make him something that would be fun and easy to chew but at the same time gave him the feeling that he was really doing something.  If you google how to make dog toys a number of folks suggest using socks or towels.  Personally I think this sends a mixed message to the dog.  How is a puppy supposed to know the difference between his chew sock and the sock you plan to wear that day?

I designed the Captain Shadow Chew Toy.  To make this you will need an empty water bottle and an old baby blanket.  Any plastic bottle will do but the sturdier the better.  I made three of these and Shadow made quick work of the flimsy water bottle while the thicker sparkling water bottles had some staying power.  I cut out a piece of the baby blanket so that it would easily fit around the water bottle.  Next I sewed it into a pocket and stuck the water bottle inside.  Finally I sewed it closed.  To add some extra fun I sewed a tie strap to the top, wrapped it around and knotted it.  Two of the toys were as simple as that.  The third had extra “arms” hanging off of it and each was stuffed with something fun at the end.  Extra material, freezer paper, etc.  Anything that would make a crinkle, crackle, crunch sound or just be fun to chew.  The extra arms also allowed for tug of war games which are always a puppy favorite!

The water bottle inside each chew toy allows Shadow to make crinkle, crackle, crunching sounds which makes him very happy.  Personally I find them far less distracting than the constant “squeak” that most favorited toys have.

Shadow’s toys were pretty basic.  I didn’t do anything to decorate them or make them pretty although you certainly could.  Add some eyes and that “armed” bottle becomes an octopus.  Even without extra decorations Shadow loved his toys and was happy to munch on them.  That is when he wasn’t munching on a human!

You are going to be spending a lot of cash on your new four-legged family member.  If you can save some dough by making your own toys I say go for it!