I’m exhausted.  I have no right to be and I have to admit the 2 hour hike in Griffith Park with Riggins and Asscher this morning didn’t help.  Still, considering what I’ve done, my sleepiness is way out of proportion.  I’ve decided I have Shadow to thank for that.

Shadow was dropped off Wednesday night by her dad for her one night stay with us.  Riggins and I instantly fell in love with the sweet girl.  1/2 Whippet, 1/2 Doberman, and 100% sweetie.  Her dad said Shadow sleeps in her own bed at home but she would love to sleep on my bed if I allowed it.  As we got ready for bed that night Shadow sadly curled up in her teeny tiny dog bed that I had placed on the ground near the foot of my human bed.  She looked up at me with such sad eyes I had no choice.  It was only for one night.  I invited her up to sleep with me.  Whippets, Italian Greyhounds, or any skinny dog with a needle nose, like to sleep under the covers so that’s what I let Shadow do.  I lifted up the covers and she buried her way down and plopped herself down next to (or on) my legs.  She was happy as a clam.  Eventually during the night Riggins decided he needed to be in bed too so he jumped up and settled in.  By morning the three of us were as snug as a bug in a rug.  I could hear everyone snoring.  Everyone but me!  Sleeping with a dog at your legs isn’t exactly restful.

Shadow’s stay got extended and the one night became four.  Each time I crawled into bed Shadow was right behind me.  I couldn’t say no now!  Shadow went home yesterday so last night you would think I would have had a great night.  Not so much.  I missed having my little leg warmer curled up next to me.  Sigh … I can never be happy.

I thought I’d share Shadow’s sleeping positions with you so you can understand better what I lived through:

1.  THE SHADOW CHAIR – This consisted of me curling up in an almost fetal position so that Shadow could snuggle up against the crock of my knee (aka under my butt). 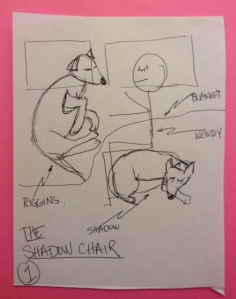 2.  THE LOTION LICK – Once in a while I’d try to lie down flat and if I did that Shadow would just lay herself flat against my leg putting her in the perfect position to lick off all the lotion I had just put on my legs.

3.  THE SCISSORS – This was the teams favorite sleeping position.  I slept at an angle giving Riggins room on his human pillow and Shadow just enough room to nuzzle between my legs.

Sweet dreams to all the human and dogs out there!