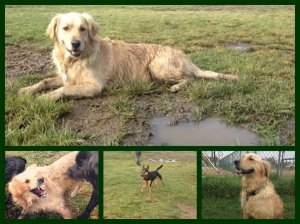 I like to live in ignorance.  It makes my life much easier.  I don’t want to know how the chicken I’m eating is raised, killed, or prepared.  In general I don’t want to see the face of anything I’m planning to eat.  If I had to there is no doubt I’d be a vegetarian.  I also don’t like to know what is tested on animals, what kind of animals, and the side effects.  Personally I think testing of certain drugs on animals can be life saving (for us silly humans) and I agree animal testing is an important step in some research.  Just as long as I don’t have to see it.  Testing things like eyeliner on animals?  That’s ridiculous.  I don’t want to purchase any make up that someone in the lab thought, “Hey … this may be toxic.  Before we let women slap it on their face let’s see if Fido reacts to it.”  All that being said animals that are used for experiments, even those I give my reluctant stamp of approval on, don’t have a good life.  In fact I dare say their lives suck monkey butt.

Last Friday the dogs (Riggins, Asscher, Miles & Lulu) and I headed out to go to the Laurel Canyon Dog Park.  We were almost there before I remembered it was closed on Friday mornings.  I grabbed my phone and clicked on my “DogGoes” app to see if there were any parks close.  There was one in North Hollywood, not to far away, that we had never tried before.  I decided to give the Whitnall Dog Park a shot.  When we got there the first thing I noticed was that the park was a muddy mess.  I knew that would make all the dogs happy and there would have to be baths all around when we got home.  Asscher (golden retriever) was in heaven.  It took her no time at all to get muddy.  Mud is her middle name! 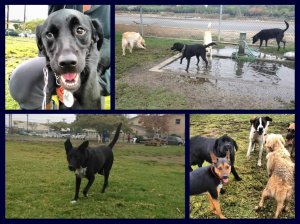 Since it was so moist it was kind of crappy.  They seemed to be working on cleaning out the mud and putting in some sort of drainage.  If it wasn’t for the mud the park would be great.  It’s huge and there is small park just as big (actually it’s 1/2 the size but still way more space than is usually given to the wee ones).  The two parks don’t share a fence like most dog areas, so if you go to the small park just drive a bit further down the street to find it.  There is a lot of grass (swamp land) so I can see how, once dried out, it would be fabulous.  Best of all the people and dogs were nice.

I met this one woman who introduced me to her 3 dogs.  One of her dogs was an older beagle.  She told me his story.  (I don’t remember his name.  Let’s call him Bob.)  Bob had been a lab animal for years.  She adopted him about 2 years earlier from the Beagle Freedom Project.  I said he was a lucky dog and her response was that she was the lucky one.  She said the little dog had taught her so much about trust and love.  When Bob came to her he was very skittish, wouldn’t take treats out of her hand, and would be very hesitant to walk on grass.  He would only sleep on hard surfaces, probably similar to the feeling he had in his lab cage.  She had him sleep on the bottom of a crate and then slowly added towels one by one and then a pillow so that he would be more comfortable.  His dog siblings taught him how to be a dog since he hadn’t had that experience before.  Now he is in a loving home and gets to go to the dog park everyday!

According to the Beagle Freedom Project 96% of animals used in laboratory research are beagles.

“Beagles are the most popular breed for lab use because of their friendly, docile, trusting, forgiving, people-pleasing personalities. The research industry says they adapt well to living in a cage, and are inexpensive to feed. Research beagles are usually obtained directly from commercial breeders who specifically breed dogs to sell to scientific institutions.” – Beaglefreedomproject.org

Although most of their rescues are beagles they do help all animals that they can that are released by the labs, and even recently took in a couple of pigs!  All their rescues are done legally, which I like.  They aren’t suggesting violence or destruction of these labs but instead are there to work with them to help the animals on to the next phase of their lives.  The good phase!  This wonderful organization is always looking for people to adopt and/or foster.  They also have events to help raise money and will be happy to receive any tax deductible donation.  Just visit their site and friend them on Facebook page for more info.