Sigh …. you guys …. I’m so depressed over my good deed fail.  I can’t even think of anything witty or fun to say so let’s get right to it.  First the non-failure.

#25 – Sack lunch.  Remember when I told you about cat man?  No?  I first introduced you to him in this post – https://wendyandriggins.wordpress.com/2013/01/15/psst-come-here-for-real-this-time/.  Then I suggested the Pasadena mob got to him in this post – https://wendyandriggins.wordpress.com/2013/01/23/psst-come-here-yes-again/.  By 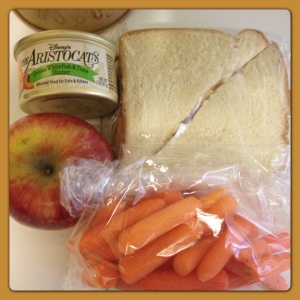 the way they didn’t.  He was back at his spot on Colorado Blvd the same day I wrote that.  It was like my blog had magic powers.  Anyway, since cat man is always asking for people’s leftovers from The Cheesecake Factory I figured he would enjoy a sandwich.  I put together a snack for him and his cat.  I have to admit I bought this particular cat food (not only because it was cheapest) because of the cute Arstocats theme.  Last night after handing cat man the paper bag full of goodies I practically marched back to my car singing the song Rescue Aid Society in my head.

FAIL – Thicker than water … especially mine.  My good friend Martha had suggested I donate platelets as one of my good deeds.  Martha is a very nice person and has been donating platelets since I’ve known her.  This seemed like a good idea but I didn’t think I could manage platelets.  To tell you the truth I don’t really know what that means.  I just know it takes longer than blood donation.  Martha explained it to me once and I immediately forgot.  I picked up a pamphlet about it thinking I’d do some research and educate all of us.  Alas I don’t have it in me know … perhaps Martha will explain it again.

A week and 1/2 ago I made an appointment to visit the Pasadena Red Cross blood donation center to donate blood.  Today was the big day.  I have never donated before so was a bit nervous.  It isn’t that I necessarily have a problem around blood.  It is the IDEA of taking my blood that makes me queasy.  I have a very active imagination.  I once fainted (or nearly fainted … I made it to the ground but only to my knees) while getting my head x-rayed.  I think they were looking at my sinuses.  I don’t really remember.  I just know the tech warned me to stand VERY STILL which was enough for me to imagine my brain going to goo because I breathed too heavily and down I went.  Slid right down the vertical table.

I was pumped (no pun intended) to donate.  It seemed like such a terrific good deed!  In my mind it would be so easy I’d make it a regular thing.  I was a bit nervous as I went through the pre-questions and iron test.  I don’t know why I thought I would fail but I couldn’t imagine the shame of being marched out of there deemed unworthy.  Luckily, or so I thought, I passed and was escorted to a blood sucking chair by a very nice lady.  I popped in ear buds and turned on an Adam Carolla podcast.  I knew if things got bad in my head I could count on him to make me giggle.  That part worked fine.  In fact I caused people to stare at me a couple of times when I laughed out loud.

it work.  Then she called over the boss who said it looked right and couldn’t figure out why the blood wasn’t oozing from me faster.  Then after a few minutes she announced, “okay you are done.”  Apparently my blood was clotting and there was no way they could take anymore.  FAILURE.  I was so upset I almost started to cry.  She suggested maybe I was dehydrated and didn’t drink enough water.  My answer was, “are you kidding I’ve spent the last 24 hours in the bathroom.”  Being a good student I had done what I was told and increased my liquid consumption before the big day and had indeed spent quality time in the restroom to prove it.  She shrugged and said I shouldn’t get discouraged and should try again.  Sigh …. I’ve always said I live in a constant state of dehydration.  I guess I really do!

They did get almost a full bag so I hope they can do something with it beside just throw it out in the reject pile.  I was sweaty and queasy and my arm was already becoming bruised from the poking around with a needle so, head down, I went to the snack table to sit down and eat some Kibbler products.

I signed up for another try in 8 weeks.  We will see how that goes — if it goes.  Sniff.  Total fail!  I gotta shake it off.  It is all so depressing.  I think I deserve a treat.  Maybe I’ll go get something yummy to eat for dinner.  I want a margarita but now I can’t drink alcohol for 48 hours and still have to drink more water than usual.  More bathroom trips in my future!