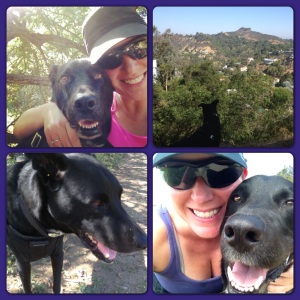 As you know, or surmised by the lack of posts last week, I was sick.  Sicky sick sick.  I really dislike when I don’t feel well.  It throws me off my routine and there is nothing worse than getting back into a routine after spending two weeks switching between lying in bed and lying on the sofa.  My goal was to get back to Runyon come hell or high water this past weekend.  I didn’t care if I was still coughing or not.  I was going to get off my tush and start moving!

Sat I got everything together and Riggins and I headed out to the hill.  Once out of the car and on the road Riggins made it clear that he was not on board with my plan.  He lagged behind and even came to a stop, looking at me as if to say, “you are crazy if you think I’m going a step further.”  People who passed looked at him with sad eyes and then angrily at me as if I was forcing this poor sickly dog to take another step.  Frankly, that may have been his plan.  There is nothing he likes more than human attention.  After a few steps I gave up and did some shorter and flatter paths around Runyon.  Riggins couldn’t have been happier to do those.  He galloped along as if nothing was wrong.

Sunday was a new day.  TODAY we were going to make it up and down the hill on our normal path … or not.  Again Riggins refused to move faster than a turtle taking the time to look up with pathetic eyes to each human who passed him.  Again I gave up and did the secret loop.  The secret loop isn’t really secret.  Although the few times I’ve done it I’ve seen no more than 2 other humans on it.  Runyon can be packed with people and the secret

loop is still deserted.  It’s possible that the reason for this is the big “no trespassing” signs you go by to get to the path.  The signs I ignore.  Frankly the signs confuse me.  It’s obviously a path.  There are park trash cans dotting it and someone even took the time to put plant markers up.  Not to mention there isn’t just one but two park benches tucked away so you can sit and meditate in the silence (or if you are me force Riggins to come close so you can take your picture together).  So really someone besides me is walking past those trespassing signs.  It’s possible that it is public property kept up by the folks who own houses around there.  My theory has always been to act like you belong and no one will question you.  So that’s what Riggins and I did.  At one point (although not in the no trespassing zone although obviously headed that way) a ranger cruised by and waved at me.  I considered that the “all clear” signal and carried on.  (Please note I in no way suggest that you should do something unlawful like pass no trespassing signs and/or ignore “dog on leash” signs.  In fact if this is an officer of any kind then I deny that any of this story is anything but fiction.)

Today, Monday, I didn’t even try the hill.  Instead Riggins and I walked around Silverlake

and then went to that dog park.  His favorite dog park.  He grumbled a bit at first when he realized he wasn’t going to be able to play until we made the loop around the “lake” but that is normal behavior.  By the time we turned the corner on the 1/2 point he was a full speed trying to get to the park part as soon as he possibly could.  Once at the park he seemed to be happy as a little lark, canoodling with people and dopily following other dogs running in circles.

So the question becomes what was Riggins problem?  Why did he refuse to go up the hill this weekend?  I have lots of theories but since he doesn’t speak English he isn’t much help in clueing me in to which one is right.  Here are my thoughts:

*  He doesn’t feel well.  He has shown some signs of having a tummy ache.  Then he doesn’t.  So this is a coin flip.

*  He didn’t think I feel good enough.  Possible.  I went to Bar Method yesterday and, for the first time ever, had to leave class part way through.  I knew I wasn’t doing well when I looked in the mirror during butt exercises and watched the color drain from my face right before things started going blotchy.  Since the next step was to pass out I choose, instead, to lay my head on the bar and then exit to the sofa in the waiting room until I felt good enough to drive home.  I’m going back today.  I REFUSE TO GIVE UP.  NEVER SAY DIE!

*  He wasn’t happy with the heat.  I’m leaning toward this one.  Riggins does not do well with the heat and although it wasn’t horribly hot this weekend we have had a few days of super heat and that puts him in “time out” mode.  I always forget how much he gears down over the summer until the winter comes and he peps up again.  His unhappiness with the heat seems to get more pronounced the older he gets.  This may just be signs that he wants to stay far away from the hot.

* He misses his buddies.  We haven’t had a dog on vacation with us this past week and Riggins seems a little mopey.  In his heart Riggins is a pack dog and would be happiest if everyone he loved (human and dog) lived with us and all slept in a pile on my bed.  He stepped it up on our walk when a group of dogs came by and took off to be part of the bunch.  He is also super happy at the dog park where he can spend his time following dog after dog until he is distracted by a human he thinks needs to pet him.

Those are my theories.  What do you think?  Either way we are getting back on that hill this weekend (as long as it’s not too hot) and I am going to Bar Method all this week …. all without passing out and/or dragging a dog on a leash behind me.