I’ve known the old LA Zoo existed for a long time and knew you could wander around in it but never tried to find it.  That is until this past Monday when I packed up Asscher and Riggins and decided to figure out where this mysterious place was!  Turns out it was pretty easy to find since it is also the location of LA’s Haunted Hay Ride (as well as Shakespeare in the Park) and it was the Monday after Halloween.  Crews were all over the place breaking down the spookiness.

The entire old zoo is now a super cool picnic area.  There is a big open grassy area and lots of picnic tables and trees.  It has to be the best family picnic location of all time.  There are big animal caves (used in the Anchorman movie) and smaller metal cages a little further up the path.  Behind the caves is an old shed with more cages.  It’s all a little spooky.  The area is supposed to be haunted but I couldn’t figure out by whom or what.  Riggins did try to put on his brakes heading toward the caves and tried to wiggle out of his harness and retreat back.  If I believed in ghosts I would say he was afraid of other worldly beings waiting for him to stumble into their world.  I don’t … so I’m pretty sure he just wanted to stay and snack on all the crap that the Halloween picnickers had left all over the ground.

You can walk around in the caves and many of the cages.  The dogs had fun going in and out so I assume it would be a blast for kids.  Of course the entire place kinda smells like urine.  Not animal urine mind you the human kind.  I’d suggest a hot bath for all when you get home.

Now for some history (according to my Google search, so I’m assuming others already verified all this information).  The old zoo was opened in 1912 and shut down in 1965.  Although there were many visitors the zoo had a number of problems.  Built on the wacky Griffith J. Griffith’s ostrich farm it had 15 animals for its grand opening.  There was continuous hubbub about how the cages were too cramped for the animals and made for poor living conditions.  During the war they weren’t allowed to feed the animals beef and were forced to substitute horse meat which caused all sorts of health problems (I suppose that means the zoo is haunted by pissed of animals).  In the 1930’s the park was expanded by work crews from the Work Progress Administrations.  Finally the city passed an $8 million bond measure to create a brand new zoo and the old zoo was closed in 1965.  Animals were moved to the new zoo a few miles up the road. 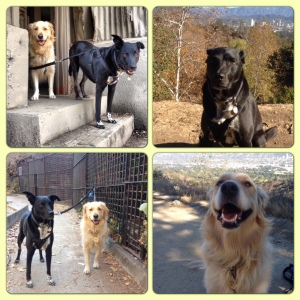 My goal on Monday was to go to the old zoo and then make my way up to Bee Rock.  It is supposed to be a short 2.5 mile hike (round trip) that has a decent amount of elevation but isn’t horrific.  From this area you are supposed to have a great view.  Sadly we went the wrong way and ended up on a little loop back to the parking lot.  I’m not one to give up so we went there again this morning.  Unfortunately we, yet again, went the wrong way.  I’m not great with trail maps and directions.  That makes Griffith Park a great hiking location for me.  I’ve read about people getting lost but I don’t see how.  Just get to a peak, any peak and look around.  You will see some part of LA and just need to head in that direction.  We walked up and up for quite a while (further than the 2.5 miles we were originally going to go) and finally turned around and headed back.  It looks like the trail would have eventually gone around to the front of the park (by the Los Feliz entrance) but we didn’t have that kind of time!

Here is the kicker.  This afternoon a dead body was found at Griffith Park.  The place is enormous (4,310 acres) so there is no way it was found where we were.  WRONG.  IT WAS FOUND RIGHT WHERE WE WERE.  Supposedly hikers stumbled upon the body just above the Old Zoo by Bee Rock.  AAAAAAAAAAAAHHHHHHHH!  I’m telling you it is only a matter of time before Riggins brings me a human hand as a present on one of our hikes.  Imagine if I had figured out the right trail?!?!?!