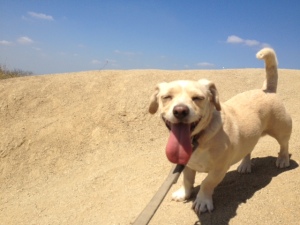 There is a really sweet little chihuahua sitting on my lap right now.  Well … he isn’t really little, more like top heavy.  And … I suppose he isn’t really sweet, just to a select few humans.  Yesterday I took the pups, four in total, on a local hike.  The chihuahua and her sister weren’t going to go far so we followed the path long enough to hit a fun watering hole and hung out so everyone could burn off some energy.  The “little chihuahua” decided he was going to spend as much time as possible holding court in the middle of the trail.  He just stood there giving the ol’ stink eye to each and every person as they passed.  Honestly I’m not sure that many people even noticed him.  At one point a gaggle of teens came trotting up and one asked if he could pet my dog.  “Sure,” I said.  The tall gangling kid reached down to touch the little chihuahua and that dog flipped the fuck out!  He went chihuahua crazy on the crowd.  Barking his tiny little mouth off and waddling around chasing them.  I was laughing so hard I almost fell of the boulder I was perched on.  It was hilarious.  The teens ran off without touching a dog even when I yelled at them that one of the other ones was nicer.

Not all dogs like people.  It’s just the way it is.  I’ve come across my fair share of these untouchables.  I had a dog for one day on Dec. 23rd.  She came into my backyard and I suggested her dad take off her harness for me and was told she doesn’t even let him do it.  Once the dog’s folks left I was stuck with a dog that wouldn’t come near me, under a bush in my backyard.  I finally got her leashed up and took her, and the other pups I had with me, on our adventure for the day.  By the time she was picked up at the end of the night she was my BFF.

Recently, due to a family emergency, I took in 3 dogs all of different stages of socialization.  One, a terrier mix, loved everyone … all time.  The second, a shepherd mix, loved most people almost all of the time.  The third, a chihuahua (sensing a theme)/dachshund liked no one ever.  When I was called and asked if I could take the pups for a few days I was warned that “Freddie” would most likely have to be isolated from the rest of the pack.  In fact I had heard about Freddie before.  He was a notorious “bad dog.”  How bad could he be?  I assured the worried party that it would be fine and I’ve worked with unsocialized dogs before. 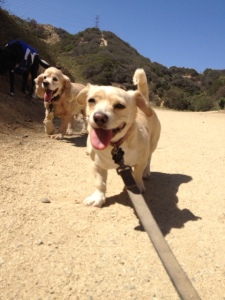 down to secure his lead he would try to bite me (I learned later that he had indeed bit his most recent trainer).  I finally made his leash into a slip lead and put it over his head.  He managed to be perplexed about what was happening long enough for me to get his leash attached to his collar.  “Okay!  Downhill from here.” — or so I thought.  It then took me FOREVER to get the threesome in the car.  Dog 1 jumped up like it he was going to Disneyland.  Dog 2 eventually let me hoist her up into the way back (I had other dogs in the back seat).  Freddie wasn’t going to let me do anything to him at all.  Once again he tried to bite me.  I managed to grab him and toss him into the front seat without his teeth making contact with any part of my body!

I got in the car, wiped off the sweet, and headed off to a local hike.  I walked those dogs until I was confident they were all pooped.  Getting Freddie back into the car wasn’t that difficult this time.  Exercise is always the answer!

At home I ignored Freddie until he decided to come to me.  By the next morning he wanted to be next to me all the time.  By midday he wanted to be in my lap all the time.  By that evening he was sleeping in my bed.  I had no problems with him trying to bite me again.  I could attach his leash to his collar without hesitation.  I could pick him up and cuddle him without being worried of getting a few extra holes put into my body.

Freddie was also great with the rest of the pack … and he came into contact with a lot of dogs.  The ONLY dog he snipped at was my dog nephew but that is because my sister’s GIANT puppy got up in his face and needed to be scolded.  It turned out Freddie was no problem and the anxiety meds that his family had given me to use sat in my car untouched his entire visit.

I’m not saying I’m magic or crazy good at my job … I’m just saying dogs tend to like me.  That and exercise is magic.   I’m sure there are exceptions to that rule.  I hope I never meet them!  I prefer to believe no one is untouchable!

Has this ever happened to you …

You are going to the bathroom and then all of a sudden have a wave of nausea come over you that is so strong it includes sharp stabbing pains to your abdomen forcing you to have to lie down.  Right now.  Of course the perfect spot would be on the cool bathroom floor but you can’t flop down there because a giant golden retriever is taking up the majority of the floor while the rest is inhabited by two little dogs who make it their job to hold guard over your ankles whenever you sit down to poo.

So you crawl a few feet and lie down in the hall only to realize that you shouldn’t have procrastinated cleaning the carpet the past two weeks because it smells like dog ass.  The stench is really only making your nausea worse and  making it hard to think about anything but cleaning the carpet so you army crawl to the bedroom and managed to lie down on the bed face down.

Deciding dehydration is part of your problem you managed to get the inner strength to stumble to the fridge for some coconut water before going back to the bathroom to lie on the floor.  The little dogs had followed you into the bedroom leaving premium floor space free.  Of course since you didn’t clean the carpet what made you think you cleaned the bathroom floor?  Too gross to even attempt you head back to the bed only to realize it is now being utilized by 3 dogs.  Since you don’t have the strength to move anyone you lie backwards on the bed with

you legs over your own dog in the hopes he will understand you have no choice at this moment.

As  you lie there moaning all you can think of is all the work you need to be doing right that second not to mention the now even more urgent need to clean all the floors in the house.   Finally  you feel stable enough to hit the bathroom and take a shower only to emerge a new person.

No?  No one?  Just me?  This morning experience was all mine? 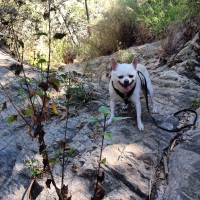 P.S.  I’m fine.  I think it was a lack of sleep (I don’t sleep well the first night with new dogs.  I’m always afraid they are going to die in their sleep.), dehydration (although I didn’t do a long hike this morning, I did have to carry the fat chihuahua part of the way),  and eating too much at lunch (I was hungry).  I suppose if I am truthful though I really just needed to poop.

Pictures are of the dogs on their hike this morning.  Notice the smile on the fat chihuahua’s face while I’m carrying him.  He is pleased as punch with himself.

Zooming with Shirley.
Although I’m loving the daily sessions online I need this to be over so @barmethodpasadena can re-open and I have a dog free zone to work out.
He’s asleep. Deep #potcake “rub my belly” sleep.