If you are like me and multi task while watching TV by being on Pinterest then you know “hacks” are the new big thing.  (I’m convinced this is why I can no longer watch anything but sitcoms.  Anything more complicated than that and I look up from my iPhone wondering why so and so is dead and have to rewind only to do it all over again because there are succulent arrangements on Pinterest that have really caught my attention).  “Hacks” are ways of doing things you normally do, but better.  Most aren’t very helpful but every once in a while you find a good one and it makes the hours you spent reading through blog after blog worth it.  Of course, you immediately forget about it once you turn your computer off or set down your iPhone.  For a good 5 seconds your life seems much easier.  I thought I’d share a few of my food hacks with you.  If we were being honest, and I will be, they aren’t hacks at all but I was trying to be hip and cool so I used that word to describe them. 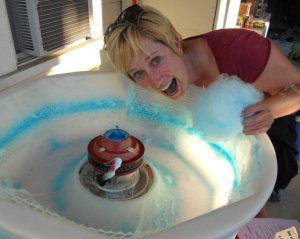 * Almond milk – Moo cow milk sucks.  It’s disgusting.  Just saying it makes me gag just a little in the back of my throat.  It also kills my stomach.  It took me a long time to admit that I’m probably somewhat lactose intolerant.  The last time I had real ice cream I spent the evening in the fetal position praying to the gods of stomach pains to just take me and be done with it.  Since my folks were not hippies and I love Lewis Black (mostly because I love Lewis Black – see video below) it took me a long time to tiptoe down the milk aisle a bit and try some of the milk alternatives.  They are pretty good guys … p r e t t y good.  My favorite is the unflavored almond milk.  It tastes a lot like non-fat milk but not as gaggy.  The very best part is that it lasts FOREVER!  I was always throwing milk away.  No matter how small a carton I’d purchase I’d never get through it before it went bad.  Almond milk is like Twinkies of the milk aisle.  It lasts forever.  Well forever in milk years.  There are other options out there.  If you have a child who likes sugary cereals give him/her coconut milk.  It probably has too many calories for you but your skinny little child can take it plus it is naturally the sweetest thing you have ever tasted … and this is me saying that … me … the woman who can eat cotton candy straight from the machine.

If you are hesitant to jump off the “Moo Cow Fuck Milk” (thanks Mr. Black) train then start with the chocolate version of your fake milk of choice.  It’s the gateway milk product that can help you transition. 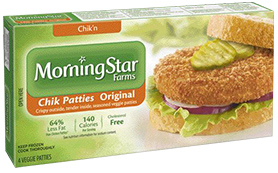 * Fake Chicken – I’m going to say this and then crawl under my desk in shame.  I really like Chick-fil-a.  It’s freakin’ delicious.  I say this as an atheist sitting here typing this while wearing a “Straight against Hate” shirt (seriously).  Those God loving folks know their way around a chicken sandwich.  I’ll give them that.  I realize I shouldn’t like them.  I know I know … but it’s goooooooooooooood.  They are also crazy nice.  Have you been to one?  Apparently the fear of God equals unparalleled customer service.  I can love my gays, Bill Nye, AND Chick-fil-a … can’t I? (Note — No offense meant toward my religious friends.  More toward intolerant folks.  Those folks I can’t tolerant — isn’t it ironic — don’t you think?)

Well besides not wanting to support that “type” of company  (that much … It’s seriously good) I also really try not to eat that many animals.  I am semi-vegetarian.  Which means I’m not vegetarian at all.  I have no health reason to be vegetarian.  I just feel like for someone who loves animals as much as I do I shouldn’t be happy with them being tortured for my food.  Don’t get me wrong if you promised me I’d never get caught I’d happily crawl into a black catsuit, slink over my neighbors fence, kill that rooster, pluck out it’s feathers, cook it and eat it.  I really hate that rooster.  I suppose I’m fine with free range type animal foods.  Sadly I’m too poor and don’t have enough patience to eat that way right this minute.  So when I can I choose vegetarian over meat … at least when I’m by myself in my own home.  I’m not putting anyone out for me being this crazy.

(*** I had to stop writing this to go meet a friend for lunch.  I had pizza that included cheese and pepperoni.  I know need to go down an entire bottle of pepto bismol.  Why does my stomach hate me???? ***)

Being a non-semi-kinda-not really-vegetarian isn’t the point of this.  The point is I want Chick-fil-a sandwiches without the guilt.  Answer … a bagel and fake chicken patties.  Now hear me out.  There is no doubt that a fake chicken patty is nowhere close to a big fat juicy chick-fil-a patty.  I’m not trying to tell you it is.  BUT it’s a pretty good substitute and for someone like me it’s perfect.  Plop one of those in the microwave and stick it in between a bagel and you have yourself a fake guilt free sandwich!  The fat bagel picks up the substance slack from the non-chicken chicken.  If you are gluten free or carb free then I can’t help you.

* Egg white sandwiches everywhere.  Now I just said I try not to eat meat. Then I told you I had pepperoni on my pizza so you know I’m not trying that hard.  I also don’t count breakfast meat.  Bacon, turkey, and sausage don’t count as long as they are consumed as part of a breakfast item.  Note that they don’t need to be consumed at breakfast just as long as they are part of a traditional breakfast item.  You can eat a breakfast burrito with bacon for dinner, for example.  One thing I don’t like at all is egg yolk.  It’s absolutely disgusting.  I like my eggs as nature intended.  Poured out of a carton titled “egg whites.”  An egg white and avocado sandwich may be the most perfect food on the planet.  Egg whites are also super easy to make plus you can act really self-satisfied when the doctor says you have high cholesterol and need to stop eating egg yolks.  “Way ahead of you doc.”  1 minute on the stove top or less time in the microwave and tada!  Perfection.  The thing is sometimes you are busy and on the road when your stomach is growling and you HAVE to stop for a bite.  Now you can actually get egg white sandwiches from quick serve restaurants (aka the classy name for fast food joints).  It’s a brave new world out there.  Subway was the first to start this new and exciting fad.  Add some spinach, cucumber and avocado and you have a great way to break your fast (I’ve been reading the Game of Thrones books).  Sadly when you have 5 dogs in the car you can’t really leave them to run into Subway for a sandwich artist to take his time putting together a piece of art.  Luckily two drive thru joints have joined in the fun.  McDonalds now has an egg white option.  It comes with canadian bacon which is gross, but you can swap it out for real person bacon or just give the canadian bacon to whatever dog is closest to you at the time.  It’s pretty freakin’ fantastic.  NOW Jack in the Box is on board.  Never one to be left out of a food fad the box now has a yolk free option.  When you hold it in your hands you are going to wonder how you got so lazy that you couldn’t make this yourself at home but then you will shrug and happily stuff it in your mouth.  Their option comes with a slice of turkey and tomato and is on a hamburger bun so you don’t forget where you got it.