This incident happened last Friday and I’m still angry.  You wouldn’t like me when I’m angry. 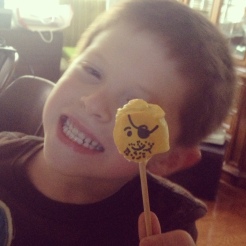 My adorable nephew enjoying his Oreo balls (shaped as Lego heads on a stick — a sort of fail on my part that I may one day tell you about).

It all started off innocently enough.  The day before I had purchased the ingredients to make my nephew birthday Oreo balls.  A delicious and sugar coma inducing treat!  Friday, when I was ready to get everything started, I realized I had left the cream cheese out all night and most of the day.  For a split second I thought I’d go ahead and use it but then decided it would be really bad if, for his birthday, I gave my nephew food poising.  It was no problem.  I had a cake in the oven that had about 25 more minutes to go before having to come out so I jumped in my car and drove down to my “friendly” neighborhood Ralphs (located in Glendale, CA on Colorado Blvd.).

I’m lucky enough to have a grocery store just down the street.  I’ve been shopping there for 7 years.  I’ve had issues with them before but, after talking to the manager, they have always been resolved and there are a handful of really nice people who work there and are great at their jobs.  Recently they rearranged everything which threw me for a loop but I have been able to re-acclimated and can, once again, tell you where everything that I need is.  It would take me 2 minutes to park, run in, grab the block of cream cheese, self check-out and be on my way.

One huge issue with this particular Ralphs is the parking lot.  It is a magnet for accidents. That is what happens when you put a parking lot in the middle of a city known for their horrific drivers.  Because of this I always park in their underground lot.  It’s less convenient but a heck of a lot safer! (Sadly my car has even been dinged in this lot.  Let’s face it, in my area, there is no such thing as “safe” parking.)

Friday, after jogging up the ramp that leads from the underground parking to the store I passed by the front door and saw a little dog just laying there.  She was patiently sitting just outside the door, mere feet from the crazy killer parking lot, no leash, no collar, just waiting.  I came to a halt and looked around to see if anyone cared that a dog was chillin’ in front of the Ralphs.  No one was.  Folks just stepped around the dog to get in as if she wasn’t even there (no surprise this is the same Ralphs where a man fell down next to, in obvious pain, and only one other person besides myself stopped to help …. not the most compassionate folks around here).  I decided I’d get my cream cheese and if the dog was still there when I came back I’d do something about it.  Of course she was still there.

I went inside and found the guy dressed a little nicer than all the other folks working.  I figured he was the manager and the one to talk to.  Honestly I figured he wouldn’t know what was happening and I could persuade him to make an announcement for the shopper to come out and get the dog.  Then I could wait and make sure the dog got back to its stupid ass owner a-okay.  Shockingly when I asked if he knew about the dog and who she belonged to the useless manager said, “yes.”  Apparently the dog’s owner had been caught shoplifting and was currently upstairs.  This information was shared with me with, what I would consider, a complete lack of customer service.  The manager looked at me once, then avoided me completely.  I asked what we could do about the dog and the manager growled at me that he wasn’t done with the man upstairs.  I got angry … I got angry fast.  This horrible person was not only the least compassionate person I’ve ever encountered he was also the most horrific person for Ralphs to think should be their ambassador as their manager.  The guy is an asshat.  He treated me as if I was the thief instead of a loyal shopper who wanted to help an innocent animal.

Let’s just “pretend” for a second the manager was a selfish prick.  I suggested it wasn’t great to force his shoppers to walk around a dog before entering their store (people in my area are historically hesitant of dogs).  If the dog got hit by the maniac drivers just a few feet from where she sat, then he would have a giant mess on his hands.  Blood, dog guts, pissed off drivers, shocked shoppers.  For his sake he should have been giving this a little more thought.

Here is what should have happened:

That’s not what happened.  Once I realized the manager couldn’t give a shit about what happened to the helpless dog I told him I’d take the dog home and give him my phone number.  He could have the thief call me when he was done with him and I’d be happy to bring the dog back.  This is when I was told I couldn’t steal the dog.  Blah blah blah … me yelling at the manager … blah blah blah. Me threatening to call the animal cruelty folks.  Him telling me to go ahead.  Me stalking off toward the dog.

I sat with her for a few minutes, plopped down right there in the middle of the doorway, but I had that cake in the oven that I needed to get out.  Once again I stormed the castle and told the manager to give me paper and pen so I could write out my number.  I then told him to have the thief call me AND to have his manager call me.  After a lot of back and forth the end game was that he had no manager (liar), and couldn’t give me the non-existent managers name (liar), and I was going to get in trouble for taking the dog (moronic liar).

Then I took the dog.

She was a sweetie and was happy to sit in my bathroom and have some water and treats while we waited for her dad to call.  She seemed in good health but I didn’t want to have her expose Riggins and my guest dogs to anything if, by chance, she wasn’t.  In my heart I didn’t want her dad to call back.  Since I surround myself by wonderful caring people I already had folks lined up via Facebook ready to help her.  I didn’t feel like she was safe with her current owner.  Remember … no collar … no leash … sitting outside a Ralphs.  Would you leave your toddler sit cross-legged outside Ralphs?  Their sweet little eyes facing the door searching for you waiting for you to come back.  NO.  BECAUSE YOU AREN’T AN IDIOT.  Sure it is different leaving a child vs. a dog but, in my mind, not much.  Two helpless creatures … two lives at stake … two neglected babies.

While waiting to see what the next step would be I called Ralph’s corporate and made an official complaint about the moronic heartless manager.  I asked for someone to call me to discuss the incident.  No one has. 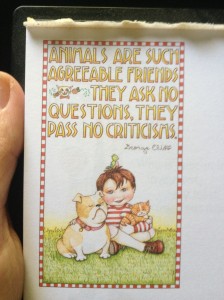 From my daily calendar today. So true. So I will pass criticism on their behalf!

Eventually Molly’s (I learned that was her name) dad called me and asked me to bring her back to him.  I did.  I dropped off Molly and a bag of treats to her grateful owner.  He thanked me for caring for her and for making sure she was kept safe.  I had expected to come face to face with a bitter and unhappy homeless person and instead was faced with a middle-aged stoner being …. well … a middle-aged stoner.  I wanted to stomp back in and scream at the manager, “He wasn’t angry you dipshit!” but I had better things to dedicate my time to at that moment.

I refuse to shop at Ralphs ever again.  It’s a pity.  I needed to go to the grocery store last night but couldn’t think of where I should go.  Today I’ll have to search out my new store that I will be frequenting.

I couldn’t go all “Hulk” on the manager at the time since I still needed to get the dog to safety and didn’t want to jeopardize making that happen.  Getting stuck in a room upstairs with the thief wasn’t going to help anyone and then my cake would definitely get burned.  After having a weekend to think about it here is what I’d like to say:

To the manager – How dare you.  You heartless asshat.  First of all the fact that you think it is okay to leave a helpless dog outside your store is unthinkable.  Treating me like I was the thief as you stood up for the rights of a person who obviously not only neglected his duties as a dog owner but also STOLE FROM YOU just makes you dumb.

To the community – Come on guys.  We are better than this.  When you see something wrong like a man falling down or a dog hanging out in front of a store, then do something about it.

To Ralphs – What a disappointment.  Not only did you allow a promotion of a person who tarnishes your brand but you haven’t put in place an adequate customer response and complaint system.  You are a major brand.  How are you getting away with that?

To the Thief – Come on dude.  Get your shit together.  Leave your dog at home when you are going “shopping” and for heaven sake DON’T SHOPLIFT.

I’d be happy if you boycott Ralphs (Kroger store family) with me.  There is no excuse for unapologetically, allowing such lack of compassion to exist within their family.

4 thoughts on “Screw You Ralphs”