I COULD MAKE IT RAIN POPCORNERS! I’M CHIP RICH MO’FO’! 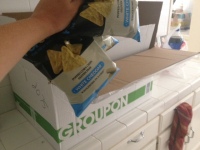 Let me back up a bit … I have a new obsession. Groupon Goods. You know Groupon right? It’s one of those deal sites where you purchase coupons or deals for a restaurant or gym (or whatever). One of those things I would purchase and then ignore and never use. I’m horrible at using gift cards or Groupons or Living Social deals or anything like that. My dad reminded me I have a gift card my mother and him gave me last Christmas for El Cholo. I LOVE 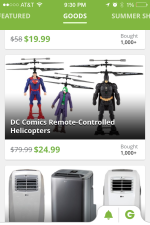 El Cholo and yet that gift card is still sitting in my wallet. I’m going next week … for sure … maybe … I did recently use a Subway gift card but that is because I was hungry, I had it in my wallet and was driving by a Subway. All the stars aligned! Somehow last month, I don’t remember the details, I magically stumbled upon Groupon Goods. It’s so exciting. It’s the most wonderful thing to hit my iPhone since Happier!

Groupon Goods is where you can purchase actual physical items at a discount. It’s like a mixture between SkyMall and Target but at the tip of my fingers. There are so many amazing deals and at the same time so many things I didn’t know I even needed. It’s just amazing and I demand you download the Groupon app (or go to their website) and check it out right now. I like the app because I 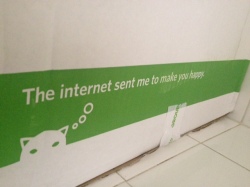 can lie in bed and scroll through amazing item after amazing item and if one strikes my fancy I hit “buy” and it’s all mine! ALL MINE!!!!!!!!! There is some stress involved since most items are limited quantity and deals only last a few days. Therefore, it is mandatory you check it nightly, like me, to make sure you don’t miss something fabulous!

Last month there was a deal for a large number of individual sized PopCorners (25, 50 … I don’t remember … it was a wonderfully large number) 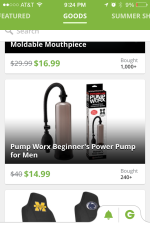 for a great price. What a perfect thing to bring to my sisters for the fourth of July, I thought. BUY! Then I forgot all about them. I got home from my sisters on the 6th. Do you know what was on my doorstep on the 7th? A GIANT BOX OF POPCORNERS! Perhaps my timing was off but it’s still the most wonderful thing ever to be delivered to my house. It’s a giant box and is taking up my entire counter. I have Popcorners for days! Breakfast, lunch, and dinner. Making it rain Popchips!

They just don’t sell food on Groupon Goods. Need a dog bed? They have a few options right now. There is an amazing array of vibrators … so many options. You want to feed your yoga pants 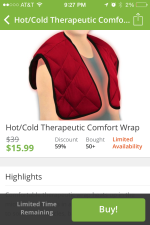 I want this. I don’t know why.

dresses, perfume, cameras, and so much more! Seriously … you gotta go check this out. 120 hair ties? What? I don’t have long hair but I feel like my zillions of PopCorner bags could use a friend or two or 120! How do you pass up a deal like that? BUY!

People hate change.  When Facebook releases a new look the world is in chaos.  It makes me crazy.  Why the unhappiness?  Embrace change!  In 48 hours you will be happy with all the upgrades and used to the new look.  Take a xanax and figure this shit out! 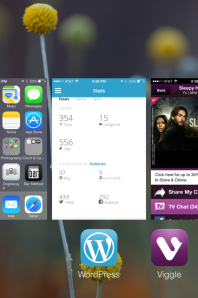 Stopping Programs from Running in the Background

When iOS 7 became available a few weeks ago my friends were all a tweet and twitter.  How dare Apple go and improve things without talking to each and every one of them.  Let’s assume Apple did copious amounts of market research on their design, colors, etc.  Although wouldn’t it be great if they didn’t?  How do I get that job?  I’d be so good at it.  “A picture of Riggins will be the default wallpaper on all iPhones!  If they don’t like it screw ’em.  Like all those Apple nuts aren’t going to be standing in line for an upgraded phone.  Bahahahahahah!”

I really like the new operating system and I feel like it is getting a bad wrap so I wanted to take some time to tell you about the new things I find nifty. Before launching into that list let’s discuss the elephant in the room.  The “look” of the new system.  Apparently some people think it is too childish and colorful.  Who hurt you?  What do you have against childish and colorful?  My biggest issue was that the pages were now too cluttered when I used my old wallpaper (picture of Riggins and me … naturally).  So you know what I did?  I changed it.  I suggest going in and looking at some of the default wallpapers to see if you like them any better.  The color schemes can tone down the shocking brightness you may be against.  Take a look at some of the static grey options. 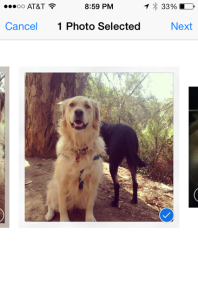 Pictures – I use my phone mostly to take pictures, to check Facebook, and to get/write email.  Don’t pretend that you aren’t as shallow as me and do fancy life changing things on your phone.  This new system has some great picture improvements.  First of all the continuous shutter is genius.  It makes taking pictures of fast-moving things (like dogs and kids) easier.  Not to mention it’s essential if you are looking to make a well crafted flip book.  It is also much easier to email, text, and post pictures.  Which is, essentially, all I do all day long.  There are now filter choices built in, but they are crap so feel free to ignore them. 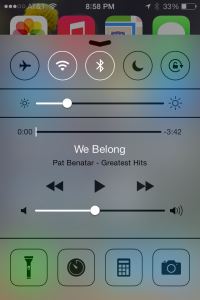 The Quick Menu (or whatever it’s called)

use the most.  This includes Bluetooth, internet, airplane mode, whatever song/podcast you had been listening to, flashlight, timer, calculator, etc.  I’ve used it to get quick access to the flashlight almost nightly.  Something I didn’t really use before because it was just too much trouble to push those extra buttons to get to it via the app.  This menu also gives you access to one of the iPhones best features, the Do Not Disturb button.  I’m madly in love with this option and use it constantly.  You can schedule daily chunks of time for DND to turn itself on automatically through the settings.  You can also choose which calls, if any, can make it through the DND setting.  Is there anything better than silence?  I think not.

The Other Menu – I don’t know what it’s called either. 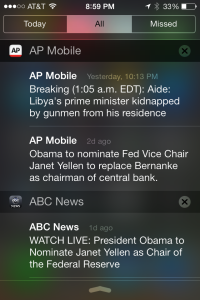 The Other Menu (or whatever it’s called)

You get it when you start at the top of your phone and swipe down.  It tells you about anycalls you recently missed, news reports (if you have those apps and enable that option), your calendar, etc.  I love this since I often get “breaking news alerts” (Genius BTW you HAVE to download news apps and turn on the alerts.  I know who died, who won what, and what state is on fire long before anyone else.) and don’t look at them before I go to the next thing on my phone.  This lets me re-read anything fast.  Remember that one night when we were all jolted awake by the alarm from hell that turned out to be an Amber Alert but we all grabbed our phones so fast and frantically started pushing buttons to make the horrific noise stop, that the message we were meant to read was gone before we were awake enough to concentrate on it?  THAT would have been the perfect time to use the “other menu” and read what that alarm was all about. 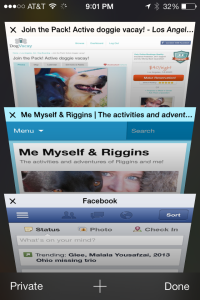 Internet – Search is easier.  Just type what you need in the address box and get to searching.  Flipping through open web pages is a ZILLION times easier and more efficient.

Weather – I LOVE looking at the weather predictions.  I can’t tell you why because I don’t know.  The new weather looks so much fancier!  I love the graphics and I love that it tells me when sun up and sun down is (something I’ve actually had to look up more than once). I love the moving clouds and the moving rain and the difference in color from day, night, foggy, etc.  So pretty.  I could stare at it for hours … and may have …

Radio – There is now Apple radio.  I haven’t used it much but it seems very Pandora-ish so great if you are 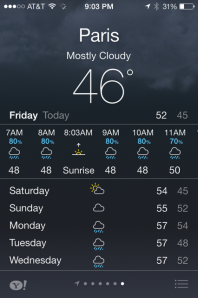 into that sort of thing.

Operations – Stopping programs running in the background is easier too.  Double click home button like you did before but now just put your finger on the screenshot of what you want to go away and swipe up.  It’s like a game!

There you go.  A real wo-man’s guide to why you should embrace the new operating system.  Come join us “early adopters”, upgrade and start having fun!  I promise you will get used to the new “look” and even “gasp” learn to like it!

Bookmark this page for easier mobile access to this blog. 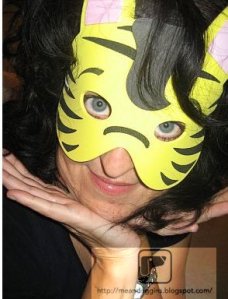 When I send messages via my iPhone there is a templatized sign off that says “Sent from my iPhone.” Some people choose to take that message off. Probably to try and fool their boss into thinking they are at their desk working vs. off shopping or something equally as non-worky. I choose to leave it on. The main reason is my lack of skill on the mini iPhone keyboard is shocking. That paired with my lack of spelling skills equals nothin’ but pure email comedy. If you don’t know, the iPhone will often try and predict what word you are typing and if you aren’t paying close attention (and I never am) then your message is often littered with odd nonsensical words. The ending message, that I am typing and sending the email by phone (vs a human sized keyboard and computer), gives my readers the security that I’m not having a stroke but instead they need to do some iPhone to human translation.

My super creative friend Martha has revised her ending message to say, “sent from my bra.” HA! HOW MUCH DO YOU LOVE THAT? I giggle every single time I read it. I’m angry that I can’t do something equally fun and creative since I often use my iPhone to write work messages. Of course Martha uses her iPhone email for work and yet, somehow, it seems totally acceptable when coming from her!

What would my email sign off be if I was as creative and free as Martha?